The 53 year-old rock singer ties the knot with the 'Nurse Jackie' creator at the San Ysidro Ranch in Montecito, California, on Saturday (May 31st). 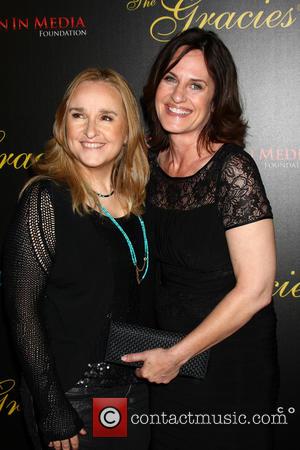 The 53 year-old rock singer tied the knot with partner Linda Wallem in an intimate ceremony at Saturday at San Ysidro Ranch in Montecito, California on Saturday (May 31st).

Their wedding celebrations came only days after they both celebrated turning 53 years on Thursday (May 29th).

"They were so happy," a guest told People Magazine. "It was really beautiful."

During the festivities, which took place outdoors, Etheridge sang a brand new song to her new wife, which she recently wrote especially for this occasion.

"It was such a magical moment," the guest added, who also revealed that the Grammy-Award winning musician wore a grey suit, and Wallem sported a traditional white dress.

"The ceremony was such a beautiful start to the night," another guest stated. "The setting was perfect. It was something Melissa and Linda wanted early on. It was as perfect as they envisioned."

All four of Etheridge's children, Bailey Jean Cypher, 17, Beckett Cypher, 15 and twins Miller Steven Etheridge and Johnnie Rose Etheridge, 7, whom she had from previous relationships, all played a role in the wedding.

On Sunday morning (June 1st) the 'Come To My Window' singer took to Twitter to share with her 59,000 followers a photograph of herself and Wallem just after they said "I do."

"True love...so blessed. "By the power invested in me by the state of California..." Thanks," she tweeted.

MORE: Melissa Etheridge's Friendship With Brad Pitt Is Over

The couple began dating four years ago in 2010, and happily announced their engagement last year when the Supreme Court overturned the federal gay marriage ban.

"It is about family and I love my four kids," Etheridge said on CNN in 2013. "I called my now fiancée. I'm looking forward to marrying my partner of three years we've been together. I'm going to get married in the state of California. I woke [the kids] up this morning telling them the Supreme Court ruling on DOMA.I love everybody out there. It's a great day."

True love...so blessed. "By the power invested in me by the state of California..." Thanks rel="nofollow" pic.twitter.com/rWftMxdxQv