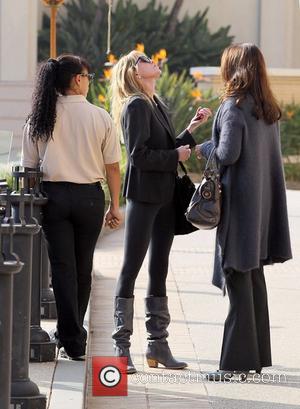 Picture: Melanie Griffith chats to her friend whilst waiting for her car after leaving Barneys New York Los Angeles, California - 01.11.11

Melanie Griffith and Antonio Banderas went to great lengths to ensure the safety of U.S. President Barack Obama during a recent fundraising gala at their home, and were even given code names from the Secret Service for the party.
The American leader headed to California in October (11) as part of his three-day trip to garner donations for his re-election campaign, and the Hollywood couple opened its home for a bash, hosted by Eva Longoria, aimed at raising funds from Hispanic donors.
Security was tight at Banderas and Griffith's mansion, and the Spanish actor reveals the whole family were given strict instructions in a bid to keep Obama safe.
The Mask of Zorro star tells U.K. chat show Graham Norton, "We had a benefit for Barack Obama. We received the President of the United States in our home! It makes me laugh because it is not something you do every day.
"We all had, in the family, code names, for security. The Secret Service (gave us the name). I was Zorro."