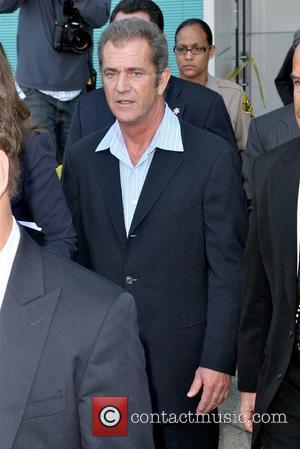 Picture: Mel Gibson leaving the Los Angeles County Superior Court Airport Courthouse after pleading no contest to a charge of misdemeanour battery stemming from an alleged...

Mel Gibson has opened up about his decision to plead no contest to allegations he attacked his ex-girlfriend OKSANA GRIGORIEVA, insisting he did it for the "sake of" his family.
The Braveheart star is still locked in a bitter custody battle with Grigorieva over their baby daughter Lucia following their split early last year (10).
The Russian singer accused Gibson of attacking her during a heated argument last January (10), claiming two of her teeth were knocked out in the alleged altercation. Taped recordings of her phone calls with Gibson were also leaked online and the actor was purportedly heard raging at Grigorieva and hurling expletives.
The star pleaded no contest to a misdemeanour charge of simple battery charge in court last month (Mar11) and was sentenced to three years probation and a year of counselling.
Gibson now maintains he chose the plea to bring the legal battle to a swift end, telling Deadline.com, "I was allowed to end the case and still maintain my innocence. It’s called a West plea and it’s not something that prosecutors normally allow. But in my case, the prosecutors and the judge agreed that it was the right thing to do.
"I could have continued to fight this for years and it probably would have come out fine. But I ended it for my children and my family. This was going to be such a circus. You don’t drag other people in your life through this sewer needlessly, so I’ll take the hit and move on."
Gibson has also spoken out about the leaked tapes, insisting they are not representative of how he truly is: "Who anticipates being recorded? Who anticipates that? Who could anticipate such a personal betrayal? I’ve never treated anyone badly or in a discriminatory way based on their gender, race, religion or sexuality - period.
"I don’t blame some people for thinking that though, from the garbage they heard on those leaked tapes, which have been edited. You have to put it all in the proper context of being in an irrationally, heated discussion at the height of a breakdown, trying to get out of a really unhealthy relationship. It’s one terribly, awful moment in time, said to one person, in the span of one day and doesn’t represent what I truly believe or how I’ve treated people my entire life."