Brown: 'Relationship With Murphy Is Cool' 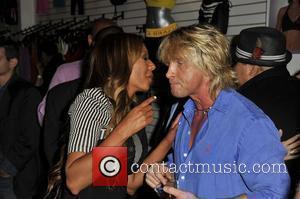 Melanie Brown has opened up about her relationship with former lover Eddie Murphy - insisting their previous battles over daughter ANGEL are "water under the bridge".
The former Spice Girl hit the headlines in 2006 after a brief fling with the Beverly Hills Cop star left her pregnant with his child.
After their split, Murphy snubbed his ex and claimed Angel couldn't be his - until a DNA test proved he was the father. Brown later claimed the funnyman didn't want a role in raising his daughter and refused to meet her.
Brown showed her support for Murphy at last month's (May10) premiere of the actor's latest Shrek movie, turning up for the event with little Angel and her older daughter, Phoenix Chi.
And now the Brit admits she and Murphy are on friendlier terms for the sake of the three year old.
She tells E! Daily 10, "We went to Shrek - we got invited by Angel's father and we all went and were supportive and it was great family fun.
"It's really cool. Everything's like water under the bridge."