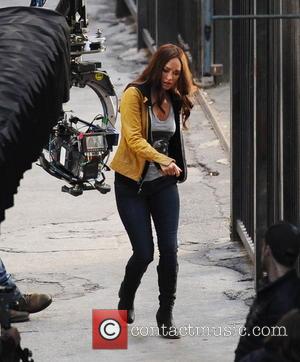 Picture: Megan Fox - Megan Fox seen on the set of "Teenage Mutant Ninja Turtles", for the first time since giving birth to her new baby...

Hollywood beauty Megan Fox plans to make just one movie a year to support her family after confessing she has lost her passion for acting since becoming a mother.

The Transformers star welcomed her first child, son Noah, in September, 2012, and she became a mum for a second time earlier this year (Feb14), when she gave birth to a boy named Bodhi.

Fox, who is married to actor Brian Austin Green, reveals having two children so close in age means "total chaos" at home and she is still learning how to balance her time between her boys.

She tells Parents.com, "It's hard because I don't feel like I'm ever giving either one of them 100 per cent of my attention or 100 per cent of myself, so I carry a lot of guilt. Do they each understand how special they are and how much I love them...? It's hard to make each one feel like an individual when you have to raise them together and manage them together all of the time."

The actress, who is currently promoting the forthcoming live-action remake of Teenage Mutant Ninja Turtles, has not signed up to any new projects since Bodhi's arrival, and Fox admits she would rather focus on raising her kids than building on her career, because she struggles with the guilt that comes with being a working mother.

However, Fox insists she won't disappear from the big screen completely: "I have to make one movie a year because I have to invest in their future and I have to be able to pay their way through college and be able to provide for them."

She adds, "It's all about trying to spend as little time away from my kids as possible."