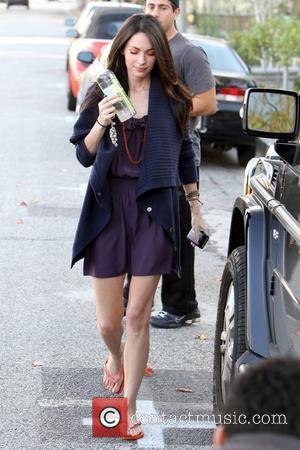 Picture: Megan Fox keeps her head down as she leaves a salon on Robertson Boulevard Los Angeles, California - 24.01.11

Megan Fox hit the ski-slopes with MAD MEN's Jon Hamm this week.
MEGAN FOX and JON HAMM were photographed on the slopes at the Mt. Peter ski resort in Warwick, New York this week, reports the UK's Daily Mail.24-year-old Fox was snapped with her hair rollers in as she filmed scenes for her forthcoming movie 'Friends With Kids. The actress was layered up in skiing attire as she and JON HAMM chatted with the movie's director Jennifer Westfeldt, who is also Hamm's partner of over 13 years. Despite filming most of her own stunts for the first two Transformers films and the comic book inspired action movie 'Jonah Hex', Fox wasn't required to film any actions scenes this week and shot most of her parts on the flat. The comedy movie, which has been filming in the Bronx for the past couple of weeks, is set to be released sometime in early 2012. The film revolves around a pair of thirty-something best friends who begin to notice the toll that having kids has taken on the couples they know. Adam Scott and Kristen Wiig also star in the move, as does the British actor CHRIS O'DOWD.
Once filming on 'Friends With Kids' is complete, Fox will begin work on the forthcoming drama 'The Crossing', which follows the story of a young couple who get caught up in a drug trafficking scheme during a holiday to Mexico.