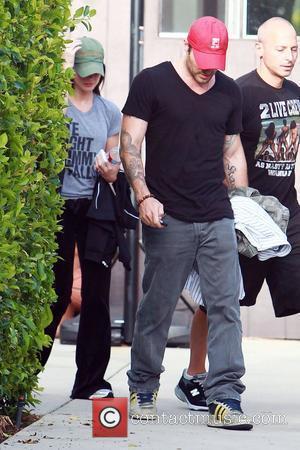 Megan Fox has a permanent reminder of the time she spent working with Mickey Rourke - she went under the needle for a tattoo tribute in his honour.
The Transformers actress became close friends with the actor while they were filming upcoming movie Passion Play.
Fox has previously spoken of her "love" and admiration for Rourke, and now admits the body art she recently had inked on her ribs was inspired by their blossoming friendship.
She tells MTV.com, "I actually got a tattoo that is sort of in honour of him. It's on my ribs. I don't know if it's been photographed yet, but it'll come out eventually, I'm sure. I just love him very much and think he's very special."
The tattoo Fox is reportedly referring to is a phrase inked on the right side of her chest, which reads, 'Those who danced were thought to be insane by those who could not hear the music.'