If you know absolutely anything about thrash metal then the name MEGADETH probably isn't new to you. Alongside Metallica, Slayer and Anthrax they make up the fabled Big Four of thrash metal, and are hailed as pioneers of this aggressive, ferocious sub-genre.

Since Megadeth's formation in 1983, following Dave Mustaine's dismissal from Metallica, they have released no less than fifteen full-length studio albums, as well as numerous side projects, EPs and live albums. Their prolific nature as recording and touring artists has ensured they have remained a predominant figure in thrash, despite the genre's changing tides over the years.

To celebrate the band's recent announcement of a North American tour alongside modern metal giants Lamb of God, this article highlights the seven best records ever produced by Megadeth.

'Dystopia' was released in 2016 and is the latest record to appear under Megadeth's name. Following on from the generally disappointing 'Super Collider' of 2013, 'Dystopia' wasted little time in rebuilding Megadeth's momentum and returning them to their full conviction. 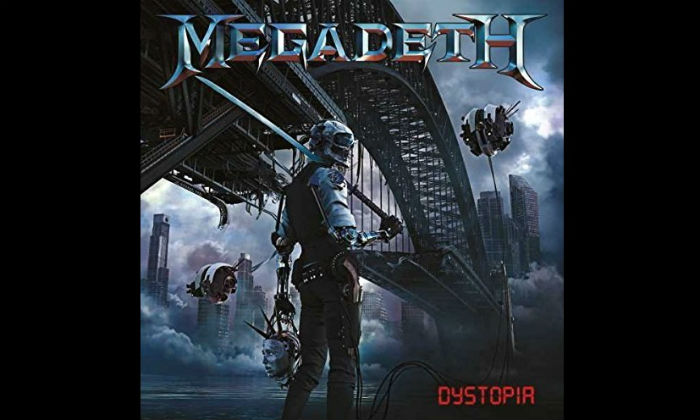 The line-up for this record had a slight cut and paste feel to it, with last minute replacements for drumming tracks being drafted in. Lamb of God's Chris Alder joined the band exclusively for the recording of this album. However, Alder fit into the outfit immediately, laying down some great drumming tracks. Key songs from this album include 'Fatal Illusion', 'The Threat is Real' and the title-track.

By the time 1988 came around, Megadeth were quickly becoming a well-established and internationally recognised thrash band. But their third album 'So Far, So Good, So What!' elevated them to new levels and saw them push political undertones in their music more than ever. 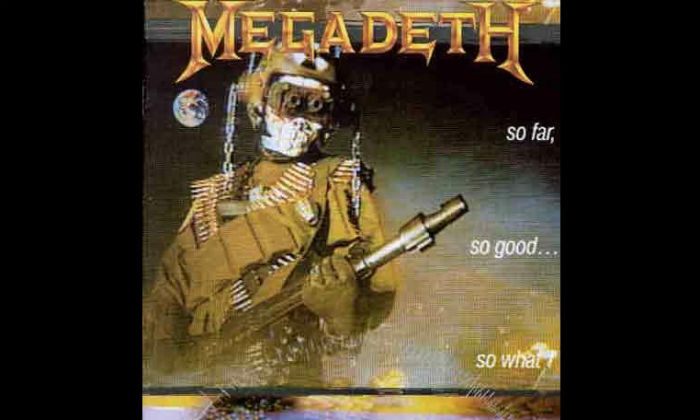 Despite receiving no commercial radio airplay whatsoever upon release, the album managed to break into the top 30 of the Billboard 200 chart. Even though this album lacks a distinct Megadeth song with a sense of longevity, it still contains a number of great tracks most notably the band's cover of Sex Pistols classic 'Anarchy in the UK'.

5. Killing Is My Business... and Business Is Good!

Here it is, the album that started it all. Megadeth's debut album was founded on Dave Mustaine's smouldering hate for his former bandmates at Metallica, and openly admitted in his autobiography that his main aim was to destroy Metallica. 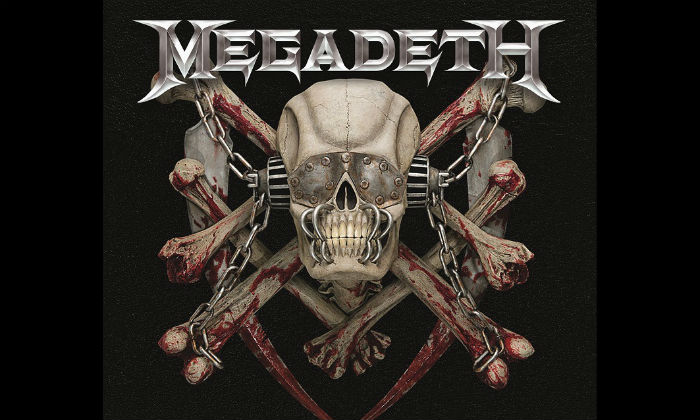 Megadeth - Killing Is My Business... and Business Is Good!

Released in 1985, the album still possesses an edge of underground raw production. 'Killing Is My Business' is now seen as an essential cornerstone in the foundation of thrash metal as a distinguishable metal sub-genre. Although it was far from the reaches of mainstream metal, it adopted a lot of common metal narratives such as occultism and violence, but the band's political spirit was yet to fully emerge.

'Peace Sells... But Who's Buying' was Megadeth's second record and their first on Capitol Records. This is the point in Megadeth's history where they started to slowly endorse political undercurrents in their music, made apparent by the cover art of the record depicting the destroyed United Nations HQ building. 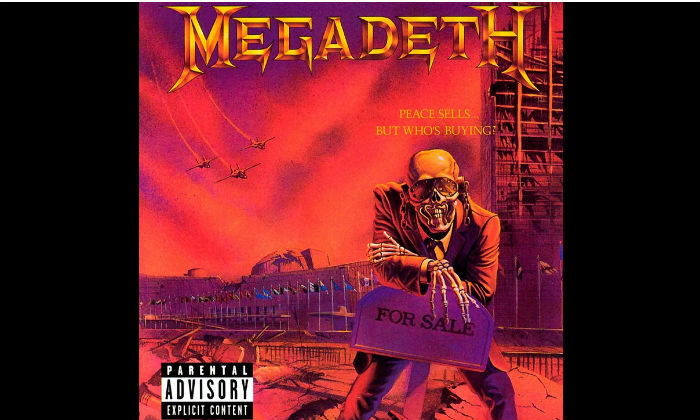 Megadeth - Peace Sells... But Who's Buying?

This was not only the band's first major label release, but it was also a fantastic thrash metal album and still a reference point for aspiring thrash musicians today. Songs such as 'Wake Up Dead', 'The Conjuring' and 'Peace Sells' are all crucial to the impact of the record, and remain top Megadeth songs to this day.

Following on from the band's most successful record to date in 1990s, 'Rust in Peace', could have been a tough task, but 'Countdown to Extinction' proved itself as a worthy successor. Hitting record store shelves in 1992, this album exploded to immediate success with a number of great singles and excellent sales. 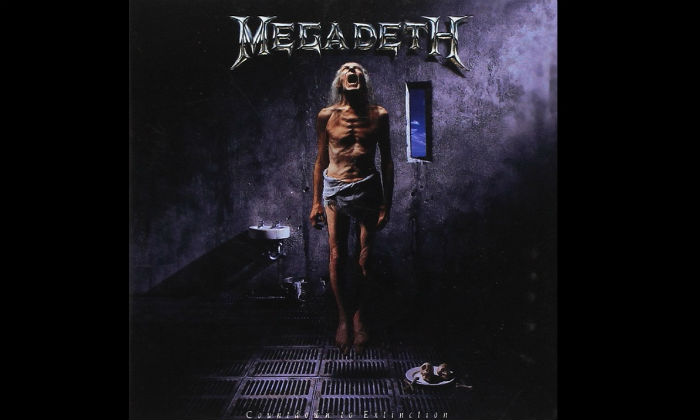 The reception for this record was immense, with the timeless Megadeth classic 'Symphony of Destruction' being released a single just a week after the album came out. Other huge Megadeth tunes from this album include 'Sweating Bullets', 'Foreclosure of a Dream' and 'Architecture of Aggression'.

Megadeth had established themselves as a key band within thrash and the overall metal scene by the time the 1980s came to a conclusion, but the 1990s would prove to be a defining decade for the band. Opening the new decade in style, they released 'Rust in Peace' on 24th September 1990. 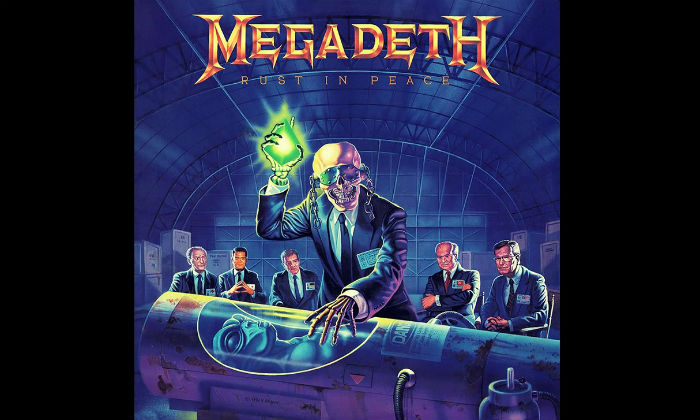 The release of the album was briefly preceded by the release of lead single 'Holy Wars... The Punishment Due' and was further capitalised on by 'Hangar 18', which came out as a single in early 1991. These were not the only great songs to appear on 'Rust in Peace', however, as 'Take No Prisoners' and 'Tornado of Souls' also appeared on this stunning album.

Even though Megadeth have made several exceptional albums throughout their career, there can only be one album that truly deserves to be called their best ever. 'Youthanasia' came out in 1994 and, over 25 years later, it is seen as one of the best melodic metal albums ever made. 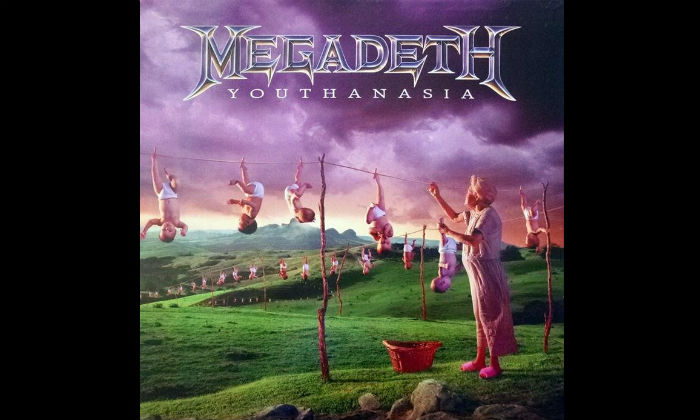 Megadeth were riding high in 1994 having released two seemingly career-defining albums back-to-back beforehand. No matter how high 'Rust in Peace' and 'Countdown to Extinction' had set the bar, however, 'Youthanasia' was able to clear it by moving the band in a new direction. Megadeth diverted from their traditional thrash sound and endorsed a more melodic focus for this record, yielding fantastic results.

Key tracks from this bona fide classic include titles such as 'A Tout Le Monde', 'Train of Consequences', 'The Killing Road' and 'Addicted to Chaos'.