The musician passed away while performing with his band OHM in LA.

Former drummer for MEGADETH Nick Menza has died suddenly following a collapse on stage in Los Angeles where he was performing a show with his band OHM. He was just 51-years-old, and while he hasn't been a long-term fixture of Megadeth since his departure in 1997, current members of the band and fans have reacted with total shock. 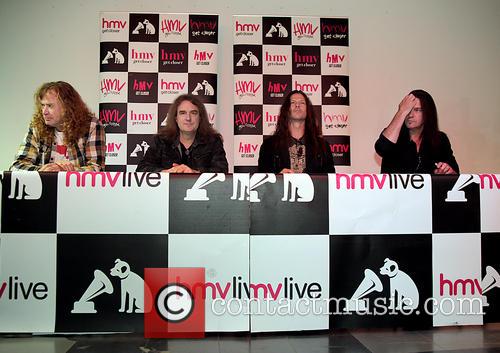 Megadeth are grief-stricken over the loss of their brother

It's reported that Menza suffered a major heart attack as OHM got into their third song while they were performing at a jazz club called the Baked Potato in LA on Saturday night (May 21st 2016). It was just one of Menza's regular sessions at the club with his band which he co-founded with former Megadeth guitarist Chris Poland back in 2002.

'Nick collapsed during the third song into a set with his band OHM. Earliest reports indicate he suffered a massive heart attack and was pronounced dead upon arrival at hospital', a spokesperson from Menza's management confirmed in a statement, according to The Guardian.

It seems to have come as a shock even to those closest to Menza, as he hadn't shown any signs of ailing over the best few weeks. The author of his upcoming biography 'MenzaLife', J Marshall Craig, described him as 'absolutely glowing' during his two-week stint with his band in the Pacific north-west. 'He was scheduled to fly to my home in Cape Cod tomorrow so that we could finish the comic-book version of the book we wrote on his life, 'MenzaLife', both of which were slated for release late next month', he said. 'This morning we are all too numb to think about anything but Nick's family.'

Meanwhile, Megadeth frontman Dave Mustaine was overcome with grief when he heard the news at 4am yesterday morning. 'I woke up this morning to a text message from my son, with the news of Nick Menza's passing', he said on Facebook. 'Shocked, devastated, and saddened don't begin to describe my feelings.' He went on to appear on Albany rock station Q103 ahead of his concert at the Rock N' Derby in Schaghticoke, New York.

'The band has already agreed [to] do a benefit in California', he revealed. 'We're working out the details. We're hoping to leave an open stage for all of the alumni for Megadeth to come there and play with us, so that we can help leave behind something for Nick's children, which I think had been kind of left in a bad way. We wanted to get all that stuff set up and right now the wheels are all turning in our camp.'

Menza - who appeared on the thrash metal band's biggest albums including 'Rust in Peace', 'Countdown to Extinction' and 'Youthanasia' - is survived by his two sons and their mother Teri, as well as his saxophonist father Don Menza.