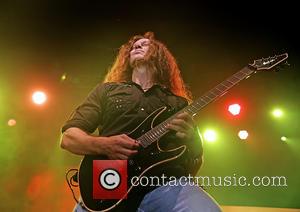 MEGADETH frontman Dave Mustaine arranged a special trip for a deaf woman who regained her hearing so she could experience her first ever rock show.

Sarah Churman, who suffered severe hearing impairment since birth, became an Internet sensation after her husband shared footage of the moment she listened her own voice for the first time following an innovative medical procedure.

The mother-of-two subsequently became a fan of Mustaine's band, and after hearing her story, the frontman put together a once-in-a-lifetime trip so she could see the group perform.

The rocker flew her to Las Vegas for Megadeth's gig with Motorhead last Thursday (17Apr14), and admits he was desperate to help after watching her video.

He tells Las Vegas Tv station KTNV-Tv, "It was such a heart-touching story to watch her... I consider myself to be pretty rugged, but I got a little teary eyed when I watched her be able to experience what we all take for granted. And then somebody had said, 'You know, she actually likes your music.' And it was just great... When we found out that she was a fan, it was, like, this is a no-brainer. We wanna meet and just say how fortunate we are to be a part of her life and this new phase."