The Game is accusing Meek Mill of being a snitch after Sean Kingston robbery.

Meek Mill and The Game have some serious beef going on right now, apparently to do with the robbery of Sean Kingston. Last week The Game released a diss track called '92 Bars' and also unveiled a shot of himself with Mill's girlfriend Nicki Minaj. Mill has since responded in kind. 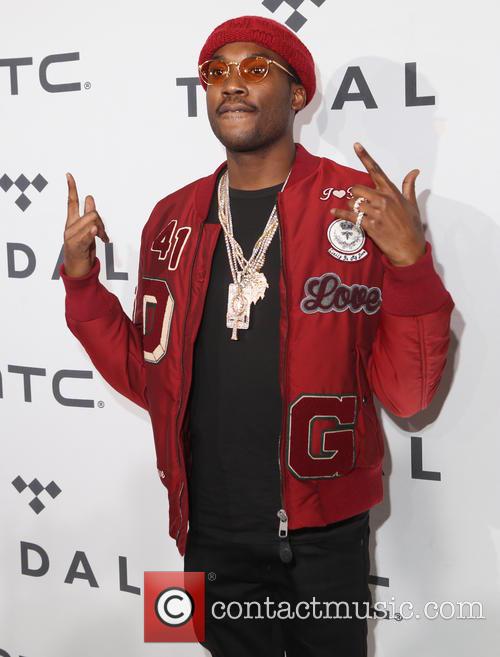 Meek Mill is in serious trouble with The Game

In response to The Game posting a shirtless picture of himself and Nicki Minaj on Instagram, Meek Mill re-posted a video of The Game crying about not wanting to be a part of hip hop following the shooting of groom-to-be Sean Bell by police officers in 2006. He's now deleted the post. From what we've gathered, The Game is angry about the Philly rapper - who was recently sentenced to six years of probation after a parole violation - 'snitching' on him to police detectives following a situation where Sean Kingston was attacked and robbed in a nightclub.

The Game released a track called '92 Bars' brutally threatening Meek, even referencing Meek's feud with Drake. 'Ever since that n***a snitched on me we just don't speak/ See that s**t you got with Drake is like a slow leak/ Blood'll be dripping like Niagara if I poke Meek', he raps.

Then it went even more graphic, with Nicki Minaj being brought into it. 'Nicki won't get no sleep, I'm coming through at 4 a.m/ Four deep, to leave his dead body on the soaked sheets', he continued. 'N***a, you know that I'll snap you like a toothpick/ And snitching on n***as ain't never been no cool s**t/ And I've been wanting to give Nicki this pool stick.'

Later, he took to Instagram to unveil a provocative image of himself and Nicki. 'The last time Nicki held a REAL N***A', he captioned the shot. '#7thGradeBodyHavinAssN***a Everybody know you the wife n***a.... If she take her followers back, you gone be back at 100k !!! #Snitch #RatsWillDoAnythingForCheese #WeakMeal.'

The last time Nicki held a REAL NIGGA !!! ?? #7thGradeBodyHavinAssNigga Everybody know you the wife nigga.... If she take her followers back, you gone be back at 100k !!! #Snitch ???? #RatsWillDoAnythingForCheese #WeakMeal

Meek Mill basically responded by calling him a hypocrite, or more specifically 'a goon' in the caption of a re-uploaded video of The Game crying. 'Y'all n***as almost 40 posting memes talking about fighting... you hurting ya own self with ya f***ed up resume Fam', he said. He then got personal, adding 'ya son know you was a stripper' and calling him 'this old clown'.

The video saw the Game sobbing about the shooting of groom-to-be Sean Bell. 'That's why I don't want to be a part of hip hop no more', he said. 'Cause it just, it just ain't right. And hip hop, it just didn't used to be like this. Ya know?'

The Game has also taken aim at Kingston with a video of his own on Instagram. In the clip's caption he wrote: 'Sean Kingston you fat scary lying ass n***a on here playing games wit this pu**y Meek Mill..... Frontin' for these people.... N***as in yo own circle set you up, whooped yo ass in the club & took all yo s**t off yo neck in front of your security & yo n***as & they watched it happened !!!!! You telling police I had sumn to do with you gettin robbed.'

#FACTS @SeanKingston you fat scary lying ass nigga on here playing games wit this pussy @meekmill..... Frontin' for these people.... Niggas in yo own circle set you up, whooped yo ass in the club & took all yo shit off yo neck in front of your security & yo niggas & they watched it happened !!!!! You telling police I had sumn to do with you gettin robbed & I set you up cause Meesha punk ass told you that is some hoe shit !!!! But what's even worse, is yo buster ass on here fakin' when you know what the fuck you called my phone & said !!!!! Meek been tellin on niggas..... Anywhere he can snitch to get ahead his rat ass will do it !!!! One day you look up & my fist gone be in yo fuckin jaw.... & ain't nobody gone be there to hide behind or help you.... You gone take this ass whoopin like a man & the world is home see me beat the hoe out you !!!!!!! I'm 1,000% sure yo punk ass & ya chubby side piece had detectives at my house before I left on tour.... Questioning me telling me verbatim what y'all niggas told them.... Keep fakin for Instagram..... You gone have to see me, & then we will see if you can stand behind the words you typing on this app bitch !!!!!!!!!!! You know in yo heart you scared & this time it ain't going away..... This one won't rest until you catch this ass whoopin.... #ItsGoingToHappen #AndDontTryAndBackPeddleBitch #AndYeaBlackLivesMatter #ButRatsAreGrey ???????? #PussyNigga #SqueakMill & yo sidebitch #TwinkieSmuggler You know I ain't rob yo fat ass, so stop lying saying that shit.... #TurningCommentsOffSoNiggasCantSmackYoComments #PussyShit #TurnThemCommentsOnBitch #ThisNiggaMamaStillMakeHisBedAndDressEm #BackToMasterSplinter #WeSeeYouDeletingShitTooMeesha #AintNoRewindBitch #YouGettinSmacked #MEEKYMOUSE ????????