Meat Loaf - It's All Coming Back To Me Now Video 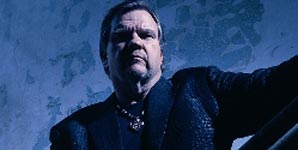 Artist: Meat Loaf
Song title: It's All Coming Back To Me Now

Meat Loaf
It's All Coming Back To Me Now
Video

Click here to watch the brand new video from Meatloaf. 'It's All Coming Back To Me Now'

Meat Loafs epic saga in rock history opens its new chapter on October 16th 2006 with the release of the epic single "It's All Coming Back To Me Now" swiftly followed on 23rd October 2006. The album was produced by hit-maker Desmond Child (Kiss, Bon Jovi, Aerosmith, Cher) with additional vocal arrangements by Todd Rundgren (producer of the first Bat out of Hell). Seven songs on the album were written by Jim Steinman, producer of Bat Out of Hell II, and principal songwriter of the first two albums in the trilogy. His involvement follows the resolution of a lawsuit over the Bat out of Hell trademark between the longtime friends and collaborators Meat Loaf and Jim Steinman. The two came to an amicable agreement that ensured that Jim Steinman's music would be a continuing part of the Bat out of Hell legacy.

Bat Out of Hell III also includes songs by Nikki Sixx (Motley Crue), John 5 (Marilyn Manson), and Marti Frederiksen (a contributing Aerosmith songwriter). Nikki Sixx confirmed that the boundary-busting creative spirit of the first two albums has been maintained on this third episode of Bat Out of Hell.

Co-starring vocal and instrumental performers on the album include original Bat 1 producer Todd Rundgren (vocals & vocal arrangements), Steve Vai, on the Gothic thriller "Land of the Pigs;" the legendary Brian May of Queen, on a revival of Steinman's song "Bad For Good;" and the internationally successful Norwegian star, Marion Raven, who is featured on Meat Loaf's interpretation of the Jim Steinman-penned immortal, "It's All Coming Back to Me Now," and is the first female recording artist since Cher to duet with Meat Loaf.

Meat Loaf, Its All Coming Back...