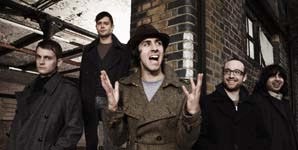 It seems incomprehensible that less than two years ago Maximo Park were playing to less than 50 people in this very same city, whereas this evening the ticket touts are out in full force as the "Sold Out" signs went on display many, many weeks ago at Nottingham's largest club venue.

Even more surprising, although heart-warming nonetheless, is the fact that they've taken those cuddly toys of everything fiercely indie Art Brut as their main support on their biggest tour to date. Especially considering the fact that a lot of tonight's audience probably don't know who Arthur Brutus is, let alone the fact a bunch of self-confessed musical nerds have taken an abbreviated version of his name as the moniker for their band.

Not that this deters a (literally) larger than life Eddie Argos from having an excitable thirty minutes berating, antagonising and duly entertaining those that bother to look and listen throughout Art Brut's quite wonderful set.

With a demeanour not a million miles from Stephen Fry's Q.I. persona, and in-between banter about ditched girlfriends, record collections and telling everyone to form a band - in fact, not exactly a million miles away from the contents of his songs - Argos is the perfect frontman-cum-compare for a celebration such as this one heralding Maximo Park's ascent into the big time. Whether or not Argos' charges will follow them is doubtful - well that wouldn't be right would it? In fact, you can almost imagine the singer screaming "Sell Outs!" at his own band even now, but the likes of 'Emily Kane' and 'Nag Nag Nag' still feel like everyone's favourite three minutes of audio pleasure, and frankly, you wouldn't have this much fun on Top Of The Pops even if you were sandwiched between Pan's People and Legs And Co.

Maximo Park on the other hand, come on like outsiders who've not only gatecrashed the Lord Mayor's ball, but kicked out the hosts and taken over the whole shebang lock stock and barrel.

Launching into an opening salvo of 'Graffiti', they're greeted almost like the saviours of interesting pop music to a man, and singer Paul Smith is in fine fettle throughout, mixing wiry angular dance moves with speaker stack assaults that would have the likes of Borrell and Flowers running for cover and even Bono glancing over his shoulder at. There's a new successor to the throne in tow and he's wearing his bowler hat like a crown.you bet.

What makes Maximo Park stand out from most of Paul Epworth's protégés of '05 - apart from being one of the few bands from that era to make a decent follow-up album, obviously - is the fact that they have developed so intently as a band, almost to the point where the telepathy revolves around the stage with the poise and purpose of a Derren Brown soundcheck, rhythm section Archis Tiku and Tom English exchanging knowing nods of approval while keyboard player Lukas Wooller and guitarist Duncan Lloyd playfully out manoeuvre each other, all the time being circumnavigated by ringmaster Smith and his (seemingly) all seeing eye.

The set lasts almost two hours but I swear not a wasted second goes by, or indeed a moment when 1700 pairs of eyes leave the stage, such is the way Maximo Park have learnt to encapsulate their audience.

Even the new songs are greeted with the same fervour as their more established material, completely dispelling the myth that John-and-Jane-10-gigs-a-year are in attendance, and quite rightly ensuring that any talk of Maximo Park being ready for the step up to even bigger stages is anything but premature.

With so many highlights in the set, it would be hard to pick one out, but the almost communal singing throughout 'Nosebleed' would suggest the band maybe have their first number one in waiting.

As the band leave the stage for the final time, the only thing left to say is "Welcome to the Premier League", for on this performance, Maximo Park have certainly earned it.