Max Clifford Divorce To Go Through After String Of Convictions

Max Clifford's divorce has been fastracked through.

A High Court judge has approved Max Clifford's divorce from wife Jo after the pair were granted a decree nisi in family court. Neither was at the hearing, which came a couple of weeks after Clifford was given an eight-year jail term after being convicted of a string of indecent assaults on four women between 1977 and 1984. 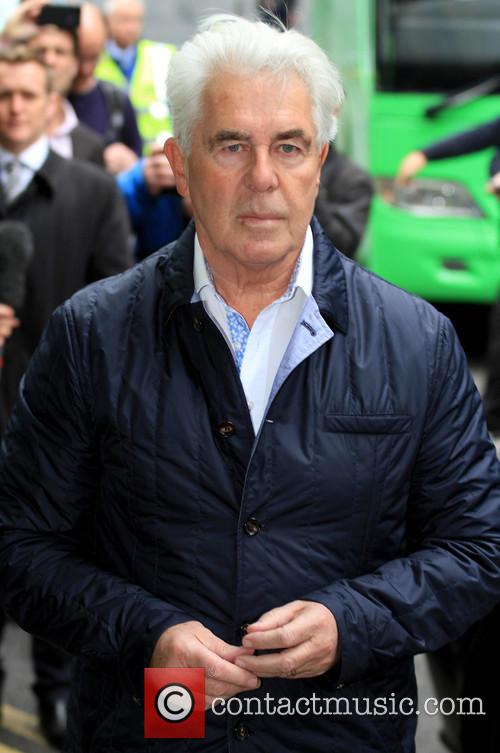 Max Clifford's Divorce Has Been Finalized

Cifford's wife did not attend any day of the trial and was not called as a witness to defend him. She had worked as Clifford's PA before marrying him. She had hired the $450 per hour celebrity lawyer Raymond Tooth to represent her in court.

Continue reading: Max Clifford Divorce To Go Through After String Of Convictions

A fired up Jim Davidson spoke of his dismay at being arrested in connection with the Jimmy Savile sex-abuse scandal this week. The former Generation Game host is accused of sexually molesting two women though vehemently denies that he has ever forced himself on anyone.

Speaking to The Sun newspaper following his release from custody, the controversial comedian said, "I've never forced myself on a girl in my life." Apprehended at Heathrow airport before a scheduled appearance on Celebrity Big Brother, Davidson was quizzed by police investing two incidents 25 years ago. However, the father of five angrily said, "It's not in my make-up to do what I've been accused of. If a girl wasn't interested I'd say, 'F*** it, all right then' and move on. I know at the end of this I will be completely exonerated. I have done nothing wrong." The 59-year-old - who won early acclaim for his comedy though has since courted notoriety for his distasteful jokes - insisted he once gave up his bed so a "drunk dancer" could sleep in safety. "I never laid a finger on her even though she was completely comatose and wouldn't have had a clue what was going on. That's what kind of bloke I am - I'm a gentleman." Nice to know Jim, nice to know.

By Michael West in Lifestyle / Showbiz on 03 January 2013

The comedian Jim Davidson has been forced to pull out of Celebrity Big Brother after he was arrested at Heathrow airport in connection with the Jimmy Savile sex abuse scandal. The entertainer was due to appear on the Channel 5 reality series - which begins tonight (January 3, 2012) - though took the decision to pull out after he was questioned by detectives.

Plain clothes officers searched his £900,000 Georgian home in the Hampshire village of Stockbridge and were seen leaving with plastic evidence bags and brown envelopes. In a statement, the former host of Big Break and The Generation Game said he "vigorously denies" the allegations, which reportedly date back around 25 years. On his blog in October, Davidson wrote, "The Savile witch hunt is going a bit silly now. We all are starting to speculate and accuse ... even in jest. So no, I don't know who's next. Everyone has had the nod. Everyone is an expert. Just pick someone you don't like and say it's them. As odd as he was, Savile can't defend himself. The bloke's dead for God's sake. Let's move on." Other high profile names arrested as part of the investigation into sexual abuse include comedian Freddie Starr, Gary Glitter and Max Clifford. They all strenuously deny the allegations levelled against them.

David's solicitor Henri Brandman said "Two women have made allegations in respect of Jim that date back approximately 25 years. The complainants were then in their mid-twenties. Jim vigorously denies the allegations."

Another arrest has been made in relation to Operation Yewtree; the widespread police investigation into alleged sexual offences, sparked by the revelations regarding Jimmy Savile’s alleged former crimes against underage girls throughout his career at the BBC. According to BBC News, a man in his 60s was arrested at 6:45am (December 10, 2012) on suspicion of sexual offences and taken to a South London police station. He has been bailed until next month.

The man arrested today is the seventh to have been questioned as part of the operation and is the sixth to have been arrested. Some of those men have been high profile public figures, such as the DJ Dave Lee Travis, the comedian Freddie Starr, the PR consultant Max Clifford and the former TV presenter Wilfred De’Ath. They have all denied any wrongdoing. The musician Gary Glitter was also arrested but has not yet made a statement.

PR guru Max Clifford may need to use all the publicist expertise at his disposal to get himself out of this one, having been questioned by police about two separate sex offence allegations some eight years apart.

Mr Clifford, 69, is best known for keeping the images of such people as Kerry Katona and Katie Price their shiniest, but is now facing an up hill challenge to keep his own reputation in check. The publicist has told the press that the allegations he is facing have nothing to do with children, but revealed that he is not allowed to discuss his 12 hours of questioning any further. Clifford's summonings into police custody came yesterday morning (Dec 6) by officers working on the Jimmy Savile sex abuse inquiry that has dominated the headlines since the deceased TV presenter's sordid past emerged.

Following his mammoth questioning session, Clifford was quick to deny any and all of the accusations he is facing, telling the crowd of reporters outside his Surrey home earlier today (Dec 7) "I have nothing to hide."

Despite his arrest under Operation Yewtree, which stems from sexual abuse claims that could date back to the 1970's, Max Clifford said the allegations "are totally without any foundation and are totally untrue", and is looking to get back to work following his bail release, Sky News reports.

He said he had "absolutely nothing to hide" over the claims levelled against him, and said, "I'll be working as I normally do - so trying to make things as normal as I possibly can in the circumstances." He said it had been "a horrible experience but you have to face up to these things", and continued to say, "The police have got to look into it (the allegations). That's what they have to do and obviously I have to answer their questions and hopefully show clearly and conclusively to them and everybody else that there's absolutely no truth in it at all." Operation Yewtree is being investigated under three categories of offences; those allegedly committed by Savile alone, those allegedly committed by Savile and others, and alleged offences by others.

A Scotland Yard spokesman said on Thursday: "The individual (held today) falls under the strand of the investigation we have termed 'others'. We are not prepared to discuss further." Among those arrested already in line with the investigation are Gary Glitter, comedian Freddie Starr, DJ Dave Lee Travis and a man in his 70s, reported to be former television producer Wilfred De'Ath.

Max Clifford was arrested this morning at 7:40am in relation to the Jimmy Saville investigation, named Operation Yewtree, reports the Independent. Clifford has been at the centre of celebrity media controversy for years, it is in fact, what brought him fame in the first place. He has been vocal about the manipulation of the media to the advantage of his clients and their publicity.

He has already claimed to be at the centre of the Jimmy Savile saga, saying that many celebs had come to him to "keep him in the picture." At the time he said, "It is a situation which could easily turn into a witch hunt, a lot of big stars are frightened.. Where is it going to end?" And in response to whether he was "compromising himself" by working alongside people that may have been involved in sex with underage people, he said: "It's very simple - I am very close friends with a lot of these people and have been for 40 to 50 years. They know I'm in the middle of the media world, so I'm the first person that they turn to, not just on this subject but lots of subjects."

While many people remain surprised by the amount of high public figures that have been named and shamed in the wake of the Jimmy Savile scandal, it seems to have opened the floodgates for justice, reflected in the mass outpouring of confessions from victims of sexual assault spanning 50 years or more, who finally recognise that being the actions of those men against their will was wrong. With protests against slut shaming as well as the outrage against the shooting of Malala Yousufzai after she spoke in favour of education for women, it appears that women's rights, bodily, sexually and intellectually, are further on the way to being given the appropriate recognition and respect that they deserve.

By Hayley Avron in Lifestyle / Showbiz on 06 December 2012

The investigation, launched by the Metropolitan Police, has been divided into three main strands. Firstly, police are looking into allegations of historic sex offences made against Jimmy Savile. Secondly, allegations against Savile and other people. Thirdly, they are looking into sex offences made against other people, unconnected to the investigations into Jimmy Savile. Scotland Yard confirmed that the man arrested today (December 6, 2012) was arrested under the latter stream of investigations. Clifford was reportedly arrested at his home in Surrey at 7:40am, in relation to historic sex offences and was taken to a London police station.

Clifford is considered to be one of the most influential people working in the British media and is often referred to as a ‘PR guru.’ Five people have now been arrested as part of Operation Yewtree and a sixth has been questioned. The response to the news has quickly seen both “Operation Yewtree” and “Max Clifford” become trending topics on Twitter. The blogger Guido Fawkes referred back to a Sky News interview when Clifford said that in the 1960s, people “never asked anybody for a birth certificate,” when it came to sexual relations.