Mausi's new single Sol is available as a free download on the band's website. It follows on from their debut single, 'Follow Me Home', which was released through their own label, 'Racecar Music', in March 2011.

The self shot video for Sol was produced by the band themselves. Starting off at Edinburgh Airport, we follow the band as they wait for their plane that takes them to Italy, where they frolic in a lake and do a spot of shopping, as well as pose in front of landmarks. The video is interspersed with archive footage of vintage cartoons, including clips from the classic 'Pinocchio'. Both the song and the video will make you long for the carefree days of summer now that winter is drawing in.

Mausi are Italian siblings Daisy and Thomas Finetto; Ben Brown and Benji Huntrods. The four met while at university in Newcastle and formed the band after performing an acapella version of Imogen Heap's 'Hide and Seek' at their first gig. 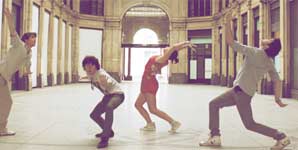