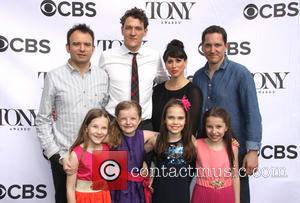 Director Matthew Warchus picked a Welsh singer for his new movie Pride after spotting her on a U.K. Tv talent show.

The film tells the story of a gay group which raised money for striking miners in Wales in the 1980s, and the moviemaker hired Bronwen Lewis to appear in a key singing scene after seeing her perform on the British version of The Voice.

Lewis failed to make it past the audition stages of the competition, but soon found herself singing on the movie set in front of a cast which includes Bill Nighy and Dominic West.

Warchus says of seeing Lewis on the Tv show, "In an instant, I knew I wanted her in the film. Her voice has a beautiful quality, and I didn't know this at the time, but she's from the very area where the film's set. You could search for a year and not find someone so suited to sing (song) Bread And Roses in (Welsh village) Onllwyn."

The film was a hit with critics when it recently screened at the Cannes Film Festival in France. It is due for release in the U.K. in September (14).