Matthew and the Atlas - Interview 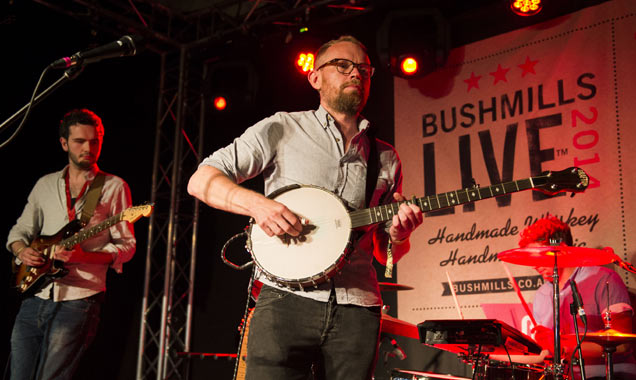 Interview with Matthew and the Atlas June 2014

Following the release of his debut album 'Other Rivers' earlier this year, Matthew And The Atlas has been touring across the UK, bringing his fledgling live show to fans across the country. Contact Music caught up with him prior to his set at Bushmills Live 2014 to talk to him about his debut album, his live shows and the reason behind the change in direction from his early EPs.

CM: How is it sounding?
M&A little rushed, but good.

CM: So we've been listening to your album 'Other Rivers'; for anyone who hasn't heard it, how would you describe it?
M&A: I was trying to move forward a little bit from the old EPs that I had released which were more folk orientated with acoustic guitars and banjo. I'd got a little, I guess, stuck in a rut with doing that, those kind of sounds, so I just started experimenting with synths and programmed drum beats and more electric guitar. That's the product, that's how the album turned out after experimenting with those sounds and I think it's a mix of slightly more indie with folk song writing sensibilities.

CM: What prompted the change from your earlier EPs to the material on your debut album?
M&A: It was just a case of I was writing at home in this little studio that I have in my house, like really basic, and I had been writing some new songs but I wasn't feeling inspired by what I was doing. So I learnt to use Logic which has a whole spectrum of different sounds which I had never really used before. I just started experimenting with those sounds really, messing around with stuff with some help from a guy called Kev Jones who runs Communion and is in a band called Bear's Den. We spent a couple of days together messing around with different sounds and basically having the same songs but dressing them up in different clothes. Then it was a case of me demoing for about a couple of months on my own and then we took those demos into the studio. It evolved a bit in the studio as well and then that's what came out.

CM: So you're the first artist that Communion signed, right?
M&A: Yeah, I think I am. I think I'm the first release that they had with the EP that I did.

CM: And apparently your debut album was 30 years in the making?
M&A: Yeah, it's so not that. I don't know who wrote that. It's more like 6 years. It's a product of when I started writing, which was quite late. I was about 27 or 28 and 'Counting Paths', which is on the album, is one of the first songs that I wrote and then 'Everything That Dies', I wrote that during the recording of the album and then the rest of the songs were kind of in between those two points.

CM: 6 years is still a fairly long time. Was it important for you to get the album exactly how you wanted it?  Are you completely happy with what you've made?
M&A: Yeah, it wasn't like it took me six years. It was more a case of doing two EPs first and then moving forward a bit and developing. The album took, sporadically, about a year in and out the studio. I'm definitely happy with the album. I'm never going to be listening to it and thinking 'Why did I do that?' or 'Why didn't I do that?'.

CM: How is the album going down live? Are there any songs you particularly look forward to playing live?
M&A: I'm enjoying playing 'Pale Sun Rose'. It took a little bit of head scratching to work out how to do it live so I spent a little bit of time with the band I'm working with now, who are great. We started using backing tracks which are a little bit like having the stabilisers on. It kind of worked for a couple shows, but you have to fit to the tempos of the backing track so we managed to get rid of them and work out what were the important bits that we thought were in the songs and put them into the live show. It's definitely worked now; it takes a little while to play it live but, yeah, it's working. 'Nowhere Now' is also fun to play live.

CM: What can the people who come to see you live expect?
M&A: I'm quite quiet really. I guess we are trying to develop the show a little bit more and trying to move away from just playing songs back to back and create more of a show atmosphere. I don't think we're there yet. I don't really try too much for audience interaction. I don't think I'm really a natural frontman. I love singing and I love playing guitar but I'm definitely not a talker on the mic. It's something I'd love to be, something I'm trying to work at, but in terms of crowd interaction I guess there's an element of when your playing to a crowd, but I don't do too much talking.

CM: Who are you looking out for on the Bushmills line up? Who do you rate?
M&A: There's loads of acts actually. I really want to see Rubblebucket. I think they're signed to Communion in the US. I haven't really heard them yet. James Vincent McMorrow, he's awesome and I've never seen him live before. The Tired Pony guys too, I hadn't heard any of their stuff; I didn't realise that Gary Lightbody had a sort of folk Americana group, so I'm looking forward to that.

CM: What can we expect from Matthew and the Atlas in the future?
M&A: We just finished a UK and Ireland tour and then we were on a support tour across Europe with a band called Bear's Den. Now we're just going to do a few festivals then I think in the Autumn I'm hoping to get to the States and to Europe again. In between that we'll be thinking about album number two as well. I'm starting to write and think about what I want to do. I've got half songs and ideas, a sketch pad of stuff at the minute. I don't really have time to write on the road; I normally write at home, come up with a song and then develop it at home in my studio space.

Matthew and the Atlas - Interview