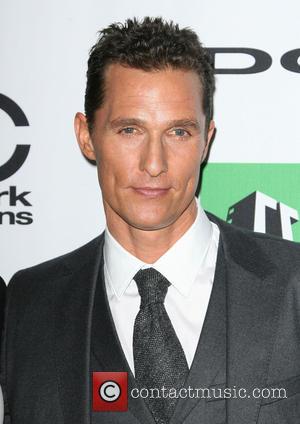 Matthew Mcconaughey has won the first ever Best Actor prize at the Gotham Independent Film Awards in New York on Monday (02Dec13).

The star was honoured with the first prize in the top acting category for his standout role as an Aids victim in Dallas Buyers Club at the fourth annual ceremony.

Taking home the Best Actress prize was Short Term 12's Brie Larson, who has been receiving rave reviews for her role as a teacher working with troubled kids.

Another big winner of the night was Fruitvale Station, as its lead actor, Michael B. Jordan, won Breakthrough Actor and director Ryan Coogler won Breakthrough Director for his first feature film.

The top film awards were given to the team behind The Act of Killing for Best Documentary, and Joel and Ethan Coen for Inside Llewyn Davis, which won Best Feature.

Special awards were also handed out to director Richard Linklater, Oscar winner Forest Whitaker and the late James Gandolfini, who was honoured by his pal and former The Sopranos co-star Steve Buscemi.

Buscemi told the crowd, "I did not know the meaning of intimidated until those first few takes and I felt as a director obligated to say something... Jimmy was very gracious and patient with me. Tony Soprano did not come easy to him. He couldn't just turn it on and off, but when he got there it was incredible."