Oscar Winner Matthew Mcconaughey Has Given His Friend Kevin Morris A Big Boost By Narrating The Audiobook Version Of His Latest Work, White Man's Problems. 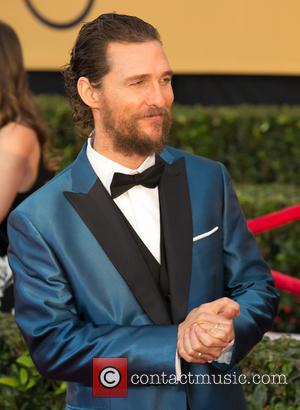 Picture: Matthew McConaughey - A host of stars were photographed on the red carpet as they arrived at the 21st Annual Screen Actors Guild Awards which...

Writer Morris, who also works as an entertainment attorney and co-produced hit Broadway musical The Book of Mormon, has penned a series of short stories about men of different ages battling a variety of life's problems, and he has recruited his famous friends and clients to read pieces for its audiobook release.

The Dallas Buyers Club star lends his voice to the first short story, Summer Farmer, and he was more than happy to help out an old pal.

In a statement issued to The Associated Press, MCConaughey writes, "Kevin's been a friend and consigliere of mine for over 20 years. I've always enjoyed his outlook and authenticities of where he's from and wants to go."

He adds, "Storytelling's what I do for a living as an actor and just like an actor, if the script's good, I don't have to do as much 'acting' per se. Kevin's stories have clear identities and sense of place."