He hadn't heard Newt Knight's story before signing on to the project.

After winning his Oscar two years ago, Matthew Mcconaughey has enjoyed picking unexpected projects like his new movie, Free State of Jones. This is the true story of Newt Knight, a southerner who led a group of escaped slaves and poor white farmers in a rebellion against the Confederacy during the American Civil War. 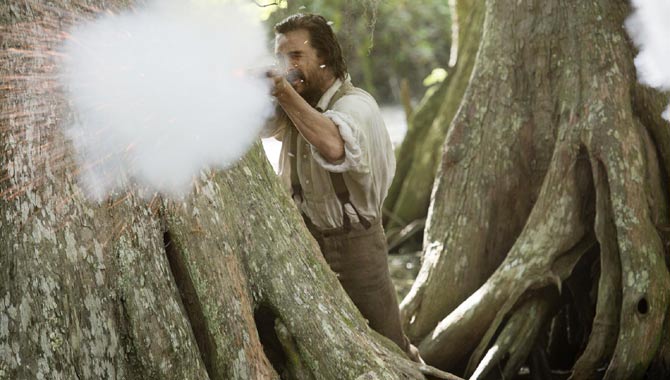 It's a story he had never heard before. "And most people I talked to had not either," he says. "I was introduced to Newt Knight via the script that Gary Ross spent the last 10 years writing. It's an amazing story about this man who fought to defend his own freedom and his neighbours' freedom during the Civil War. And then, in the third act of his life after the Civil War ended, he continued to fight for African-Americans' rights in the South until he was buried in the ground next to his black wife when he was 94 years old."

A Texas native, McConaughey was drawn to Knight's deeply held values. "He had a moral code rooted in the Bible and the Declaration of Independence: Love thy neighbour as thyself, and all men are created equal," he says.

Watch the trailer for 'Free State Of Jones' here:


And he's surprised that Knight's story isn't taught in history lessons. "I, like many other people, asked, 'Why have I not heard about this? Why did I never read about this?'" he says. "It wasn't even passed down through populist folklore. He was a man with a very simple creed: if he saw a wrong, he did not know how to ignore that wrong. He didn't measure the consequence of his actions, but he just took action. This is a guy who, on his ideals alone, was ready to wage a war. And he did!"

Knight's principles were an inspiration to McConaughey. "I couldn't help but feel a certain very vital relevance," he adds. "One of the underlying things is that freedom's been something that people have fought for since long before the Civil War. And I'm pretty damn sure that it's going to be something they're going to be fighting for long after next year."

He also sees this as a fundamental American story. "America turns the page and evolves quicker than most places historically," McConaughey says. "In that way I'm inspired and honoured to be an American. I'm not saying everything is just as it should be, but our ambition and our diligence to march forward for change, to test it out - that excites me about our country."