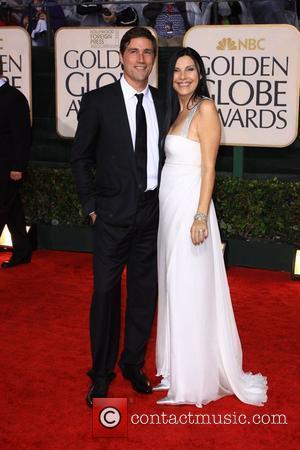 Matthew Fox's representative has slammed reports the Lost star cheated on his wife with a stripper, accusing the dancer of making up the allegations for "financial gain".
In an expose with In Touch Weekly, Stefani Talbott claims she first met the 43-year-old actor last July (09) while she was working at Stars Cabaret in Bend, Oregon.
The 25-year-old alleges she "made eye contact" with Fox before he approached her to strike up a conversation.
Talbott tells the publication, "He asked me, ‘Why are you working in a place like this?’ I told him that I am a single mum and needed the money. He absolutely did not mention a wife or family, and I don’t remember him wearing a wedding ring."
The busty blonde was reportedly invited back to Fox's rented property, where they continued to flirt.
She says, "We sat around and talked about his show. He complimented me and was saying how down-to-earth I am. He told me he was going to be in town for a couple of days."
Talbott alleges they then headed into the bedroom, where she had unprotected sex with Fox: "He didn’t tell me to keep it a secret or anything. He didn’t even use protection. He didn’t seem concerned at all."
But Fox's publicist, Danica Smith, has blasted Talbott's claims as lies.
She tells WENN, "These accusations are false; it is some stripper's attempt for financial gain."
Fox has been married to former model Margherita Ronchi for 19 years and they are parents to daughter Kyle, born in 1998, and son Byron, who was born in 2001.