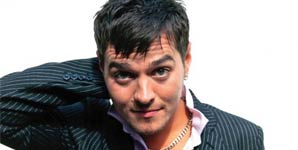 Matt Willis is poised to release 'Hey Kid', the second single from his much anticipated debut album. The movie world has embraced the single with 'John Tucker Must Die' featuring the release. 'Hey Kid' ties in with the forthcoming film 'John Tucker Must Die' starring Jesse Metcalfe of which Matt has shot a special new video for. The video, which sees Matt coaching a group of cheerleaders and contains excerpts of the film, will be shown on tv and before the film is screened in cinemas. 'Hey Kid' is an upbeat anthemic ode about getting what you want if you set your mind to it, it is released through Mercury Records on August 21st.

Matt's debut single 'Up All Night', which was out in May, was his first Top Ten hit as a solo artist. Prior to it's release Matt had been busy writing and recording in such glamorous places as Brussels and Southend, putting the finishing touches to his debut album. Written and produced with Jason Perry and Daniel P Carter, formerly of the band A, and their friend Julian Emery, It is chock full of monster tracks, with a sound that Matt accurately describes as "Stadium pop" - think Robbie, Green Day and Van Halen jamming underneath a firework display. The album will be out on November 13th, following the release of Matt's third single ''Don't Let It Go To Waste', on November 6th.