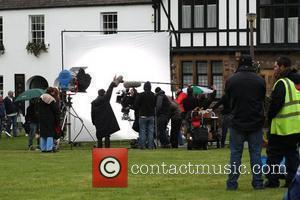 British actor Matt Smith was forced to seek medical attention on the set of his new movie after collapsing during a physically gruelling stunt.
The new Doctor Who star appears opposite Eva Green in upcoming film Womb, and he was determined to film all his own action shots.
But Smith keeled over when one stunt became too much.
He tells Britain's Esquire magazine, "It was in St Peter-Ording, on the north coast of Germany. They said I could use a double, but I'd worked myself up to do it, so I went into the sea three times. It was the coldest I've ever been.
"The next shot we did, we were running along the beach and I was so frozen I couldn't move. I just hit the deck."