Matt Smith Says Doctor Who Is The 'Greatest' Role

Matt Smith attended the opening of the new 'Doctor Who Experience' attraction in London on Sunday (20.02.11) and admitted he feels privileged to be playing the ''greatest television part'' in Britain. 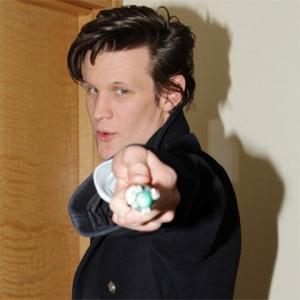 Matt Smith says starring in 'Doctor Who' is the "greatest television part" in Britain.

The 28-year-old actor met fans young and old as he attended the opening of the 'Doctor Who Experience' at the Olympia venue in London on Sunday (20.02.11) and admitted he feels privileged to play the titular Time Lord and loves all the fun he gets to have as the character away from the TV series.

He told BANG Showbiz: "In my mind it's the greatest television part in this country, and one that I really relish and enjoy doing. And I feel very lucky to have such a wonderful writer (Steven Moffat) behind me who makes it unpredictable and inventive, and really challenges what the show is about.

"Only this job affords you such rare opportunities, things like coming to the 'Doctor Who Experience'. I'm aware it will only last while I'm doing 'Doctor Who' and then I'll forever be saying, 'I used to be Doctor Who!' It's a wonderful thing and it's something that I'm here to enjoy, because it's a rare thing to get an acting job that allows you to come to a thing like this and walk around and have fun."

Matt came face-to-face with a host of enemies from the BBC show's entire 48-year history, including several different generations of Daleks, a Zygon - who battled the Fourth Doctor Tom Baker in 1975 - an Ice Warrior - who clashed with Second Doctor Patrick Troughton - Cybermen, Weeping Angels and a huge K1 Robot, as well as a life-size model of himself.

The sci-fi star spent hours with his face covered in plaster to create the model and could only breathe with the aid of straws inserted in his nose, but he admits it was worth it to see the end result.

Matt joked: "Well, I think it looks like me. I did check it over, I mean, I would hope my skin tone is a little fuller! But I think they've done a good job. The whole team has worked really hard on this thing, it's cracking."

The 'Doctor Who Experience' also features an interactive 3-D walkthrough which allows fans to step inside the TARDIS and join The Doctor in a battle against The Daleks.

For more information and tickets go to www.doctorwhoexperience.com.