Matt Damon Says Meeting Wife Luciana May Have Been Fate 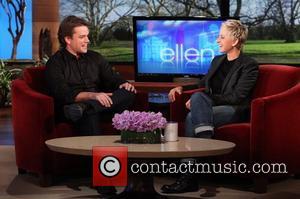 Picture: Matt Damon makes his first appearance on 'The Ellen DeGeneres Show'. The actor discusses being a Harvard drop out and says he is not...

Matt Damon says meeting his wife of six-years may have been fate.
Matt Damon, the American actor whose character in the new movie 'The Adjustment Bureau' has his destiny manipulated, says a similar thing may have happened in his own life, reports OnTheRedCarpet.com.Damon met Luciana in Miami in 2003 and the pair began dating shortly after. They were married in 2005 and are parents to four daughters, including one from the interior designer's previous relationship. The actor says the couple may have met for a reason, saying, "When I look back at my life, and look at some of the most incredible things that have happened in my life, like meeting my wife, and I think of all the things that had to happen for us to meet and eight years and four kids later, I can't imagine life without her. All that stuff happened by some series of coincidences, so it makes you wonder - is there an Adjustment Bureau there, kind of, helping me out?" Damon and Luciana have been praised for keeping their family life largely out of the public eye, but they have been photographed together at a number of recent red-carpet events such as the Academy Awards.
Matt Damon and Emily Blunt play a politician and a ballerina who are kept apart by mysterious forces in 'The Adjustment Bureau'. The romantic-thriller opened in the US on 4th March 2011.