Matt Damon sent Ben Affleck and Jimmy Kimmel a photo of his butt in response to their twitter jabs on the 43 year-old been too old fashioned to join the social media site. 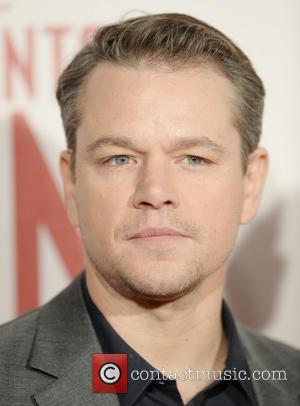 Matt Damon finally gets his say!

When the 43 year-old and Ben Affleck were both promoting their charity contest which benefits the East Congo Initiative and Water.org, Damon was a victim to some friendly heckling.

The 'Elysium' actor was dubbed "too scared" to join twitter which Affleck is using to help promote the contest.

And also joining in on the fun was talk-show host Jimmy Kimmel.

It all started when the 'Argo' director tweeted, "Want to hang with us? Support @EasternCongo & @Water for your chance."

Kimmel retweeted the message, to which Affleck responded, "Will Matt and I see you there too in support of these great orgs?"

"I will be there, my darling @BenAffleck," the late night host replied.

The jab then came from Affleck who posted, "@JimmyKimmel -- I thank you buddy," before adding, "And @eaterncongo & @water thank you! Matt on the other hand? Matt you there? Right. We will fax you."

Kimmel couldn't resist take his own swing and wrote, "Matt is probably too scared to get on twitter because no one likes him."

And what was the Oscar-winner's response?

Damon sent a fax over to Jimmy and Ben, which was a photo of his bare bottom with text that read, "Dear Ben & Jimmy, Here's my fax. Love MD."

Kimmel later took to twitter again to post the butt shot and wrote, "@BenAffleck - did you see what your "friend" Matt faxed to us? NSFW."

"Looks like u from here, Jimmy. All 4 charity?," Ben replied before promoting the contest once more when he added, "#faxingmattdamon jokes aside, the kids in this story from @medium & @cironline are a reminder of why we're doing this."

In late January the new 'Batman' actor announced that for $10 you can enter a competition to win a trip to LA and hang around with Matt Damon and Ben Affleck for a day. All proceeds will go to the chosen charities.

Watch Affleck and Damon talk about their upcoming charity competition below