Matt Damon finds it harder to stay in shape

Matt Damon finds it harder to stay in shape as he gets older and he only goes to to the gym when he's being paid. 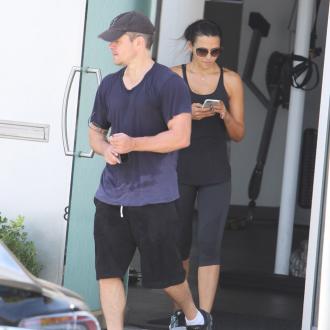 Matt Damon finds it a lot harder to stay in shape as he gets older.

The 44-year-old actor, who is currently shooting the upcoming fifth installment of the 'Bourne' films, was forced to give up some of his favourite indulgences, including ''burgers and beer,'' to get ripped for his return to the franchise and admits he wouldn't do it if he wasn't being paid.

The movie's producer Frank Mashall recently shared a shirtless picture of the actor's chiselled physique from the set, but Matt claims he had to spend a lot longer in the gym to achieve the results compared to when he starred in 'The Bourne Ultimatum' in 2007.

But the 'Martian' star, who raises daughters Alexia, 16, Isabella, nine, Gia, seven, and Stella, four, with wife Luciana, insists he is looking forward to celebrating his 45th birthday with his family next month.

He said: ''We'll probably go have dinner. [I just want] everyone to be happy.''