Matt Damon: 'Donald Trump Wants To Keep People Like My Wife Out Of The U.s.'

Matt Damon Is Appalled By Donald Trump's Plans To Build A Wall To Keep Mexican Immigrants Out Of America, Because His Wife Is Latino. 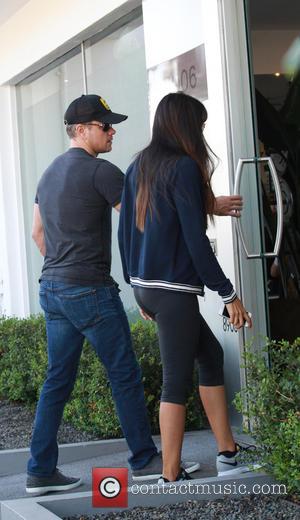 Picture: Matt Damon , Luciana Barroso - Matt Damon and his wife holding hands as they arrive at their local gym , in Beverly Hills, CA....

The Bourne Identity star admits he cannot take the property tycoon seriously as a potential presidential candidate because he makes such outrageous remarks.

The movie star also can't believe what he's hearing from the mouth of Trump's fellow Republican hopeful Dr. Ben Carson, who recently said that no Muslim should ever be President of the USA.

The actor has links to Carson - the medic appeared alongside Damon in the comedy Stuck on You.

"There's a scene (in the movie) where Greg Kinnear and I are separated and Ben Carson plays the surgeon," he explains. "We shot with him for the entire day. He could not have been lovelier. (But) I can't believe some of the things that he says."

Unsurprisingly, the fervent Democrat has already picked who he'll be voting for in next year's elections: "I'm supporting Hillary (Clinton)."