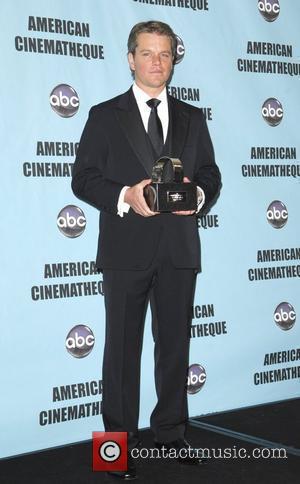 Matt Damon was the butt of his pals' jokes on Saturday (27Mar10) as Ben Affleck and Jennifer Garner came out to honour The Bourne Identity star for his career achievements.
The actor was named the 2010 recipient of the American Cinematheque Award and he was teased by the Hollywood couple as they took to the stage at the Beverly Hills, California event to pay tribute to him.
Garner, who is married to Damon's best friend Affleck, joked about the pair's close bond, saying, "Ben is half of one of the greatest love stories ever told - not with me.
"The actual prototype for the great Hollywood Bromance... Here's proof that love is alive and well in Hollywood. At least for my darling husband and my darling husband's darling husband."
Affleck, who grew up with Damon in Massachusetts, added, "Matt always said to me, 'Ben, there are two things that are more important to me than anything else in this world... fame, money.' You did it Matty! You got there!"
The audience, including former U.S. president Bill Clinton, Damon's Ocean's Eleven co-star Don Cheadle and his Invictus director Clint Eastwood, were in for more laughs as comedienne Sarah Silverman also poked fun at the night's honouree.
Silverman, who recruited Damon to film the spoof video I'm F**king Matt Damon, joked about giving the star "his first really big break" when their clip became an online hit in 2008, but admitted there was little she could really criticise him for.
She said, "The worst thing I could say is, you know, Matt Damon is like, maybe he's a perfectionist. And his breath is like, Jesus! And his hair plugs are really obvious. Besides that, there's like nothing."
Damon even managed to raise a few chuckles of his own with his acceptance speech, telling the crowd, "I can honestly say that there's a good chance that next year Ben will be here, presenting this award to someone else. There's a lot of buzz about Vanessa Hudgens."