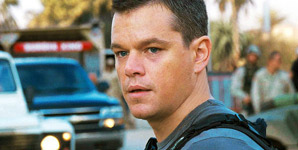 We spoke with Matt Damon about his latest film Green Zone which is released on Blu-Ray & DVD on 12th July 2010.

Q. When did the filmmaker Paul Greengrass and you start planning this project?

Matt: 9/11 and the war in Iraq are two huge things that have happened in this last decade and Paul wanted to make films about them. He started with United 93, and then by the time we were doing The Bourne Ultimatum together he told me he was ready to make a movie that engaged with Iraq; but he couldn't quite figure out what it was going to be until he came across Rajiv Chandrasekaran's book Imperial Life in the Emerald City. I remember we were in Tangiers when he told me: "You have to read this!"

Q. What was his approach to this movie?

He had already made Bloody Sunday and United 93 -that were based on true events- and also the huge action Bourne films; so, the idea was to blend these two types of movies into one and shoot a big action thriller that took place in the real world.

Q. How do you see Chief Miller, your character in Green Zone?

He is a good soldier and a decent man that goes to Iraq looking for weapons of mass destruction (WMDs). His mission is very clear, but he finds things to be very different to what he had been led to believe and asks himself: "What happened?"

Q. He is based on a true person.

Yes, he is based on Monty Gonzalez, who led Mobile Exploitation Team Alpha (MET A) into the first WMD sites they started exploring. He fully expected to find these weapons and told me he wanted to be the first one on CNN holding the evidence.

Q. When did he realize something was wrong?

He realized it in the first site he explored, which was a porcelain factory that was supposed to be a duel-used facility that also harbored weapons of mass destruction. In our movie we have a very exciting beginning in which we go into a factory and don't find anything. Then I complain about it saying it's the fourth time that it has happened, when Monty actually realized something was wrong on his very first attempt to find WMDs, and then all the team leaders started calling each other.

Q. What was the experience of meeting Monty Gonzalez like?

The moment I met him we spent about four or five hours just sitting and talking. He's my age and we graduated from high school the same year, though we chose very different paths. Monty has given his career and service to the American military; but when I asked him why he was participating in this movie he thought about it for a second and said something that I think came at a price for him: "Because we need to regain our moral authority."

Q. The story takes a huge turn when, after failing to find any weapons of mass destruction, Miller meets the Iraqi Freddy, played by Khalid Abdalla.

Khalid is a great actor, and there is a soulfulness that he has that makes him feel so alive on screen. It's because of him and the rest of the amazing cast I worked with that Green Zone is so special. And a lot of it has to do with the way Paul Greengrass works, because rather than casting actors as soldiers he used real veterans.

Q. Did their presence help your performance?

It completely made my performance different because it felt like I had thirty technical advisors there with me. Everything they do is correct and you don't need to tell them how to stand or where to go. If you took a group of actors and tried to make this film it would require a lot more energy and work, and even after sending us all to boot camp you still wouldn't achieve that sense of authenticity.

Q. How does Paul Greengrass make the film so real?

It's hard to explain, as he takes the screenplay and stretches each scene without worrying about technicalities. Sometimes actors can overthink things during a shoot; but not with Paul because, when nobody really knows what's going to happen, he just creates this beautiful chaos that when captured the right way feels so real.

Yes, and it's full of real discussions that real people were having -like my scene with Greg Kinnear and Brendan Gleeson during the video teleconference when they lay out the arguments of the dreamer versus the ones of the realist.

Q. After shooting your last two Bourne movies with Greengrass, how did he surprise you on this set?

I hadn't worked on Bloody Sunday and United 93, where he used non-actors and 30 to 60 minute improvisations; but I was expecting some of that here because he and I talked in depth about how he had made those films. Nevertheless, it was an exhilarating thing as an actor to have a strong sense of what you need to accomplish in a scene and what your character wants, knowing there are other people with that same kind of feeling and urgency.

Q. Can you give an example of how that unpredictable environment led to an exhilarating experience?

There was a take with Said Faraj in which he just wasn't listening to me and I asked a marine to muzzle him. I'll never forget how real the look on his face was, because he didn't know how far it was all going. And I remember thinking that even if it didn't match the continuity of the scene it could still end up being the right take.

Q. Was it quite a rough and physically demanding shoot?

A little bit, but it was OK. And I wanted to wear real military gear because all those details help your performance come alive, especially if you are surrounded by soldiers and you want to start feeling like one too.

Q. Most of the film was made in Morocco.

Yes, that's where we shot the bulk of the movie, and it's such a hospitable place. It's the third time I've worked in Morocco and I have a lot of friends in the film community there.

Q. And you also went to Spain.

It was incredible because Peter Chiang, our visual effects supervisor, made it look like Iraq's Green Zone in the end. And believe me, the South of Spain doesn't look anything like Baghdad, but Paul's vision and Peter's expertise made it happen.

And it got so cold while we were there, but you can't tell in the movie.

Q. What did you feel when you saw Green Zone completed?

I was thrilled! Now I am curious to see how people will react to it.