Actor Matt Bomer Has His Old Drama School Pal Joe Manganiello To Thank For Convincing Channing Tatum To Include A Steamy Musical Segment For His Character In New Stripper Sequel Magic Mike Xxl After Gushing About His Vocal Talents Onset. 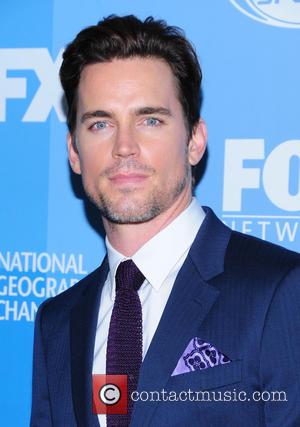 Picture: Matt Bomer - A host of stars were photographed as they arrived for the FOX 2015 Upfront event which was held at the Wollman Rink...

Bomer and Manganiello are alumni of the Carnegie Mellon School of Drama in Pittsburgh, Pennsylvania and they both reprise their roles as male dancers in the follow up to 2012's Magic Mike.

However, this time around, Bomer was given the opportunity to show off more than just his good looks and dance moves thanks to a few words from Manganiello.

The True Blood hunk explains, "Matt is just a humble guy and I feel like sometimes I'm Matt's agent or letting people know, 'You gotta hear Matt sing.' We were filming in Tampa (Florida) and Matt and I were out at this karaoke bar and I dared Matt to sing Jon Bon Jovi, Blaze of Glory, and he sang it so well and so hard and nailed every note. A lot of people crash on the rocks of Bon Jovi songs at karaoke bars all over the world and Matt killed it so bad (sang it so well) that he got a free bottle of water afterward (sic)!

"I remember coming back the next day and talking to Channing and saying, 'You gotta make Matt sing (in the sequel).'"

Tatum listened to the tip and Bomer ended up choosing to belt out soul star D'Angelo's 2000 track Untitled (How Does It Feel) onscreen.

Manganiello continues, "So now the world will know! He killed that D'Angelo song (in the movie) which is not an easy feat."

Bomer quips, "I just don't want to be on D'Angelo's bad side!"