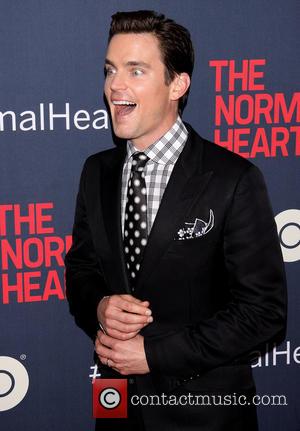 Actor Matt Bomer spent a month living apart from his family as he prepared to play an Aids victim in new Tv movie The Normal Heart, so he could fully embrace the mindset of his desperate character.

The Magic Mike star slimmed down drastically to portray Felix Turner in Ryan Murphy's screen adaptation of the hit Larry Kramer play, about the early days of the Aids epidemic, and he temporarily moved out of the home he shares with his publicist partner Simon Halls and their three children to perfect his transformation.

He tells Vulture.com, "The whole point of the weight loss was obviously to create a certain aesthetic that Ryan was happy with, but also to create that physical reality for me. When the cameras were rolling, I wasn't having to affect anything; so much of it was already there.

"I had separated myself from my family, I was living on my own for, like, a month, and I think that helped me sort of get into Felix's head in a way that I haven't had an opportunity to do with other characters before."

Bomer also called in a professional counsellor to make sure his sons would be Ok with dad's drastic weightloss - but he admits he needn't have worried.

He adds, "We definitely prepared our kids really early on, before I even started losing weight. I spoke with a professional who told me how to relay it to them in language they could really understand, and they were great about it.

"Maybe it's a luxury of having all boys, who are like, 'Yeah! Go!' You know, it's like they were my cheering squad. And I remember, at one point I had lost 25 or 30 pounds and I came home, and it's such a testament to childhood imagination, because they were like, 'Oh, I thought you were going to be skinnier than that.' And I was like, 'Hey, I'm working here!'

"But they were really great about it, and understanding. I think that our oldest son, who tends to be a caretaker, said at one point, 'When are you going to get to eat pancakes with me again?' But that was about as difficult as it seemed to get for them."