Muse frontman Matt Bellamy has revealed the band's new single, which he teased is titled 'Psycho', is ''too offensive for radio'' so won't receive airplay.

Muse's new single is ''too offensive for radio''.

Frontman Matt Bellamy made the revelation in a response to a fan on Twitter, revealing their forthcoming tracks might not get much airtime due to the risky nature of their new music.

Responding to a fan who asked ''are rumors about airing the single on the radio true? (sic)'', he wrote: ''Too offensive for radio...''

The 36-year-old musician - who has recently been romantically linked to singer Lana Del Rey after splitting from long-term partner, actress Kate Hudson - also teased the release of their new music by posting links to articles about brainwashing, suggesting the group's first single will be called 'Psycho'.

Quoting a question posted by a follower, he then wrote: ''''@ryleeishaught: @MattBellamy can't tell if you're hinting album themes or just expressing your opinion via social media'' Single 1 Theme (sic).''

The band - whose last album release was 'The 2nd Law' in 2012 - are expected to release the album, which has been tentatively named 'Drones', later this year, featuring production from Robert 'Mutt' Lange. 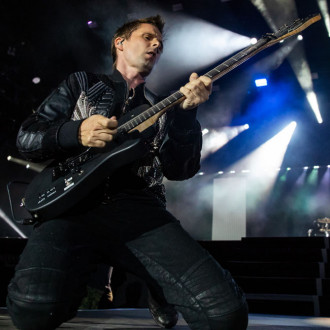