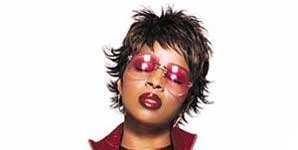 The heavyweight champion of the production world Rodney "Darkchild" Jerkins returns with a groove that is simply jaw dropping to lay firmly behind the undisputed queen of the world of R&B. Mary J Blige doesn't just sing this, she nails it. I don't know what it is with Mary, but on her latest album she has stepped up to such a level, that it begs the question, can anyone live with her, in this kinda mood probably not. The face slapping snares that come outta the speakers and slap ya square in the face. Those droning, haunting keyboards and production sounds that are oh so Darkchild. Added to lyrics that are just as jaw dropping as the vocal performance and production. You can do nothing but love this monster
urban hit.