In what may be the last time these two cooking stalwarts get together, Great British Bake Off professionals Mary Berry and Paul Hollywood shared a toast as they reunited for the BBC Good Food Show in Birmingham. 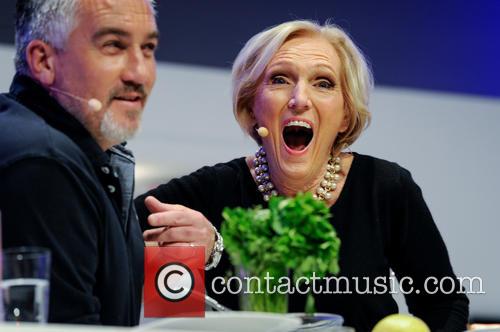 Mary Berry and Paul Hollywood teamed up for the BBC Good Food Show - but could it be the last time?

Fans of the two chefs (and mostly fans of Bake Off) were delighted to see the judges enjoying each other’s company - particularly after the tumultuous summer viewers have had when it was announced Bake Off was moving to Channel 4.

The pair gave live cooking demonstrations while enjoying a glass of wine in each other’s company in front of an audience who had travelled to the BBC food extravaganza between 24 and 27 November.

MORE: Bake Off Fans Lose One Last Hurrah As Comic Relief Special Scrapped At The BBC

Mary and Paul teamed up at the Supertheatre area of the show to give three live recipe demonstrations to the crowd - with Paul also hosting a number of solo slots on the stage.

Ahead of the demonstration, Mary had a pair of enormous pair of safety scissors as she was given the honour of officially opening day three of the show.

MORE: Mary Berry Could Lead Rival Cookery Show To Bake Off With Presenters Mel And Sue

The pairing of Mary and Paul is particularly bittersweet as they are going their separate ways following the upset of Bake Off.

Paul has agreed to stay with Love Productions and the show when it moves to Channel 4 while Mary will remain with the BBC along with Bake Off presenter, Mel and Sue.