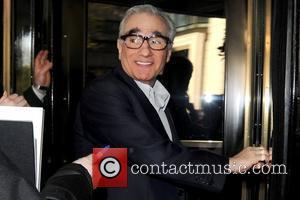 Picture: Martin Scorsese American film director arriving at The Dorchester Hotel and deciding not to sign an autograph London, England - 27.04.10

Martin Scorsese almost missed out on the chance to produce new hit TV series BOARDWALK EMPIRE - until Mark Wahlberg convinced him to reconsider.
The period-piece crime drama, starring Steve Buscemi, debuted in America on Sunday (19Sep10) to rave reviews and big ratings.
But Wahlberg, Boardwalk Empire's co-executive producer, admits convincing the veteran director to get involved wasn't easy.
He tells the New York Post, "I'm actually responsible for this TV series. It started when I read the book. I thought it was great. I immediately called Scorsese. I knew this was his vehicle. He wasn't interested. I said, 'Marty, you have to read this. Gangsters, drama, your kind of thing.' I kept at it. I never let up. Finally, he read it and loved it... I convinced him."
And Wahlberg insists Scorsese hasn't looked back since: "Now he says, 'It makes me feel I'm back in the 1970s.'"