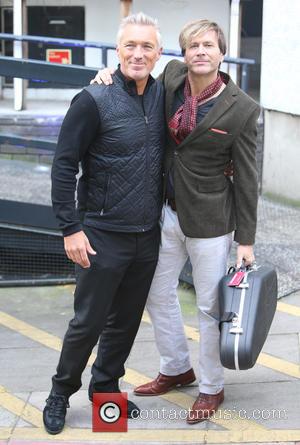 Celebrities have taken to their Twitter.com accounts to pay tribute to the star, including veteran drummer Jones, who writes, "I am so heartbroken to hear that my friend Alvin Stardust has passed away. My thoughts are with his family," while Kemp adds, "RIP Alvin Stardust".

Costa, of British boyband Blue, played the star's onstage son in a touring production of musical Boogie Nights and writes, "R.I.P. Alvin Stardust had the pleasure to work with him on Boogie Nights tour playing my dad thoughts go out to his family."

Stardust's second ex-wife, British actress Liza Goddard, has also penned a thoughtful message. The Skippy star was married to the musician in the 1980s and they have a daughter together.

She writes, "RIP Alvin Stardust. Thank you for our beautiful daughter and granddaughter."

Martin Kemp has 'no beef' with his Spandau Ballet bandmates

Martin Kemp's ego was out of control

Martin Kemp finds it weird being 'heartthrob' for grandmothers

Martin Kemp: 'My dog's more spoilt than my kids'