Hot Tickets - US Movie Releases - The Hobbit Bound For Box Office Success, Save The Date Is A Rom-Com Let Down, Pacino and Walken Save Stand-Up Guys 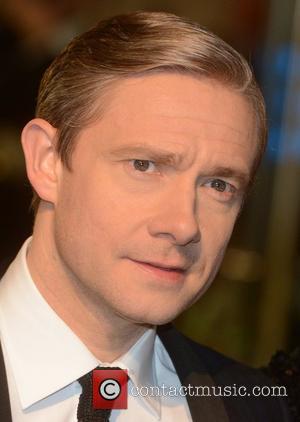 Picture: Martin Freeman at the premiere of "The Hobbit: An unexpected journey" at Odeon, Leicester Square, London, England- 12.12.12

Obviously, the big chatter is all about Peter Jackson’s latest movie, The Hobbit: An Unexpected Journey, which has arrived to a great fanfare but received a mixed response, thus far. Thanks to the legions of fans hooked on the very thought of a Tolkein adaptation, The Hobbit will undoubtedly attract enough over-excited cinemagoers to bump it up the box office ratings and we will most likely see Skyfall slipping down the ratings chart.

Despite reports of movie fans vomiting in the aisles of their local movie theatres, with their stomachs unsettled by Jackson’s decision to film The Hobbit at 48 frames per second as opposed to the standard 24 frames per second, the film has just about escaped the wrath of the critics. Although the response to The Hobbit has hardly been a case of anyone shouting from the rooftops, bursting with praise, Martin Freeman has been widely praised for his performance as Bilbo Baggins, balancing the fine line that his character must tread between comedic and heroic.

There’s a general sense that a certain degree of commitment is required of the viewer, in order to enjoy this movie, with Peter Travers of Rolling Stone writing that the movie “forces audiences to run an obstacle course before the fun kicks in.” The fun does kick in though, so it’s well worth a punt – be one of the many millions off to see this movie this weekend. You might not have your socks blown off, but you’ll not be disappointed.

Read our review of The Hobbit

Watch the trailer for The Hobbit

Obligatory rom-com release for the weekend comes courtesy of Save the Date. As is often the case with romantic comedies, it has been met with an almighty groan from reviewers. Not quite as hefty a groan as Playing For Keeps got last week, granted, but a pretty big groan, nonetheless. Rom-coms need to do something pretty special if they’re going to poke their heads above the parapet of decency (see Silver Linings Playbook for reference, there) and Save the Date doesn’t quite manage it.

With an unimpressive score of just 42% on Rotten Tomatoes, this comedy, about commitment, weddings and the trials of love in the modern age somehow fails to hit the mark, dismissed by Village Voice as “Yet another unfocused movie about generic relationship quandaries. Even Lizzie Caplan’s isn’t enough to save this lightweight comedy.

Watch the trailer for Save the Date

Stand Up Guys gets a limited release this weekend. Starring Al Pacino, Christopher Walken and Alan Arkin, this dark, dramatic comedy tells the tale of two old friends, one of whom has just ben released form a long stint in jail, who are tasked with committing murder. The cast may be stellar, but the response to the movie, sadly, has not been. Luckily, Walken and Pacino’s performances are just about enough to stop this one sinking without a trace.

Even the “inevitable Viagra joke,” in a movie about three older men still living the lives they lived as young criminals, can be forgiven, it would seem and Variety give it the thumbs-up, writing that “Veering between buddy movie and action-thriller, Stand Up Guys is a mildly raunchy, modestly entertaining geriatric comedy.”

Watch the trailer for Stand Up Guys

Jason Becker: Not Dead Yet is a documentary about the young musical prodigy Jason Becker, who was diagnosed with Lou Gehrig’s disease at the age of 19. He went from gracing the covers of guitar magazines, to being confined to a wheelchair. The young guitarist refused to give up on his dream of making music and, with help, learns to create music with the aid of modern technology, despite not being able to move or speak.

Though reviewers seems frustrated at some of the details left out of the documentary, it nonetheless makes for a moving tale, with Tom Huddleston of Time Out commenting “We never sense Becker's frustration or the forces that drive him, but we can still marvel at his dogged endurance.”

Watch the trailer for Jason Becker: Not Dead Yet