Jason Aldean is already sitting pretty at the top of the country music singles charts, with ‘Take A Little Ride’ and this week, he’s looking to do the same with his album, Night Train. It’s the fifth studio album from the 35 year-old, who likes to mix a little hip-hop in with his country. Night Train is pretty much a dead cert to storm to the top of the US country music charts, but how will it fare in the Billboard Hot 100? His last full-length release, My Kinda Party rocked in at number two; surely this time round, Aldean will be looking for that elusive top spot?

From country infused with hip-hop to one of the forefathers of ‘alt-country’: Jason Lytle. Formerly of Grandaddy, Lytle releases his fourth solo album this week, entitled Department of Disappearance. So far, the album’s received an impressive score of 80 on the metacritic reviews site but it remains to be seen whether or not an alternative artist such as Lytle can translate into chart success.

It looks as though country music will be dominating this week’s charts again; American Idol winner Scotty Mccreery is getting in early with the Christmas releases and launching his festive tunes for all of the world to hear. If the phrase Christmas With Scotty McCreery fills you with dread then this is never going to be the album for you. If however, the thought of having your family dinner soundtracked by the pearly-white perma-grinning McCreery sounds agreeable then you may as well get in early, grab a copy of the album right now and watch to see if he can grab another US number one album, or whether he will have to admit defeat to the almighty Aldean.

Martha Wainwright - You Cheated Me Video 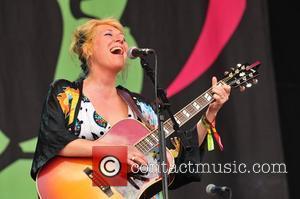 Wainwright: 'Drugs In Music Is Normal'