With the reason behind Maroon 5's name kept from the public, it turns out that now, the only people to know it are the band members themselves and singer Billy Joel. 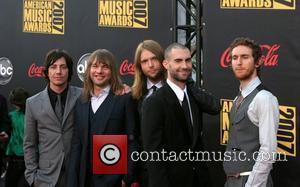 The revelation only came after Joel offered to tell Levine a similar secret. In a recent interview, Levine stated, "I'm a huge Billy Joel fan. I was having dinner at Nobu in New York, and I ran into Jay-Z, who I'd just met, and he introduced me to Billy. I had to ask him, 'What do you say in the sax solo in Still Rock And Roll?, because I thought he said, 'All right, Rico.' He was astonished. He took a second and said, 'All right, Rico.'"

It was this secret that led to Levine disclosing the reason behind the band's name. He continued on to explain "Later he came over and asked, 'Where'd you get the name?' It's the stupidest, s**tiest story you've ever heard, but I had to tell him."