'Ted 2' Gives Mark Wahlberg A Chance To Get Crazy

As the sequel hits, he reflects on the success of MacFarlane's talking bear.

When Seth Macfarlane's 2012 comedy Ted became a massive hit, work predictably started on a sequel. But MacFarlane was keen to do something new, so this film pushes both the talking teddy bear Ted (voiced by MacFarlane himself) and his human pal John, played by Mark Wahlberg. 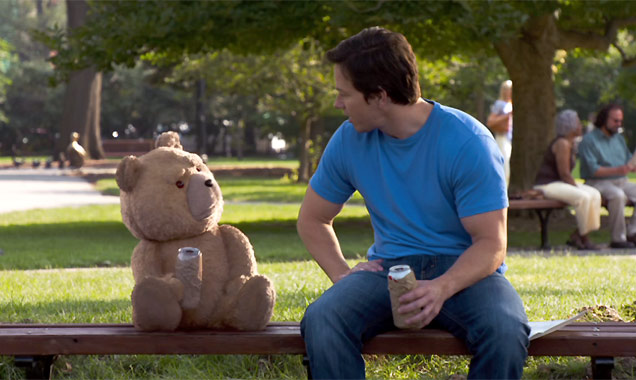 Despite ending up with the girl in the first film, Wahlberg insists that John hasn't settled down. "That wouldn't be any fun," he laughs. "No, no, no, they're crazier than ever!"

This time, both have romantic complications, as Ted wants to have a baby with his new wife Tami-Lynn (Jessica Barth) while John hits it off with Ted's pot-smoking lawyer Samantha (Amanda Seyfried).

Watch the trailer for 'Ted 2' here:

Wahlberg says he would never have made the film if it wasn't better than the first one. "I'd never made a sequel before, so I never even had the discussions about this one," he says. "And then Seth came up with an idea that he wanted to talk to me about. Once I heard it I was like: oh great, not only is it going to be better than the first one but it will also be its own thing. It's not just telling the same story twice. So I was thrilled about it."

It's interesting that Wahlberg almost passed on the original film. "Everybody had the same reaction to the first movie. It's such a hard movie to pitch," he says. "You know, you're talking about a teddy bear and this guy. When they tried to pitch it to me I thought it sounded ridiculous - 'I'm not interested!' Then I read the script, and just a few pages in I forgot it was about a teddy bear. Turns out to be potentially one of the greatest buddy comedies of all time!"

Even so, he was reluctant to leave his manly movie-star persona behind, even once. "Coming from a tough neighbourhood, I didn't want to disappoint the guys back home by playing softer characters," Wahlberg says. "But as an actor you've got to learn to be vulnerable, have different edges to you and not just do the same thing over and over. Ted is the kind of film where I could do something very different and have a lot of fun doing it. Seth has a wicked sense of humour."