The actor was the master of ceremonies during the Pope’s visit to Philadelphia.

Actor Mark Wahlberg managed to slip in joke about raunchy comedy Ted while speaking in front of Pope Francis. Wahlberg was serving as the master of ceremonies on Saturday night during the 'World Meeting of Families' event in Philadelphia, which was headlined by the visiting Pontiff. 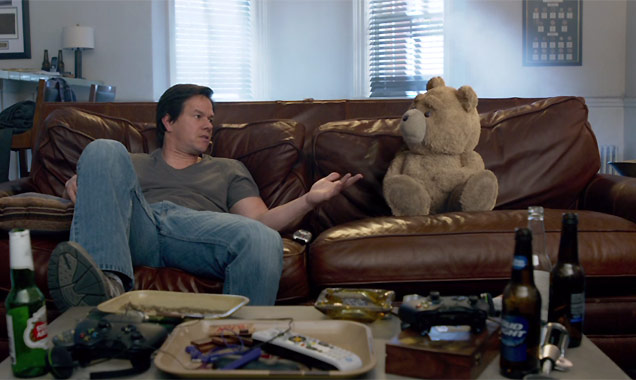 Mark Wahlberg managed to mention his friend Ted during a speech in front of Pope Francis.

At the event 14 year old Bobby Hill of the Keystone State Boychoir performed a solo rendition of 'Pie Jesu', while Pope Francis watch on from the stage. After Hill’s performance Wahlberg said, "He whispered in my ear that he liked the movie Ted.’”

More: 'Ted 2' Gives Mark Wahlberg A Chance To Get Crazy

"I told him that was not appropriate for his age. Holy Father, please forgive me. I’ve always hoped that the good Lord has a sense of humour when it comes and pertains to many of the movies that I’ve made,” the actor added.

While Wahlberg might seem like an odd choice as host for the event to some, the actor has been very outspoken in the past about his Catholic faith. In 2010 he told the Catholic Hearld, “Being a Catholic is the most important aspect of my life.”

More: Mark Wahlberg's 'Entourage' Is About Friendship Not Bikinis

Wahlberg also took the opportunity to cheer on the local sports team, shouting "Go Eagles!” as he introduced Herb Lusk, a pastor and former running back for the Philadelphia Eagles. The event also included performances from Aretha Franklin, Andrea Bocelli, The Fray and the Philadelphia Orchestra.