'1917' Mark Strong will become the latest host of 'Krakenory' in which he will read passages from classic nautical tales.

The 56-year-old actor - whose filmography includes 'Shazam!', '1917', 'The Imitation Game' and the 'Kingsman' franchise - has teamed up with Kraken Black Spiced Rum for the drink brand's literary venture which is inspired by CBBC's 'Jackanory' reading TV series.

Strong will read extracts from classic tales including 'The Kraken' by Alfred Lord Tennyson, 'Dover Beach' by Matthew Arnold and 'Part II of The Rime of the Ancient Mariner' by Samuel Coleridge and his videos can be seen on YouTube and Kraken's official Instagram and Facebook pages.

Speaking about the venture, the British actor said: ''I've played some villains in my time, but when it comes to the bad guys, nothing compares to the mighty Kraken, as viewers of 'Krakenory' will soon find out.

''So come join us on a voyage to the unknown. Once you're lost in the pages, you never know where you'll end up.''

New episodes featuring different celebrities will be released weekly to entertain audiences who find themselves self-isolating at home.

The first episode of 'Krakenory' saw The Libertines frontman Carl Barat don a smoking jacket and perform a rendition of 'The Drunken Sailor', followed by a reading of a key passage from Jules Verne's '20,000 Leagues Under the Sea'.

Strong played the role of Captain Smith in '1917' and revealed that he found it ''daunting'' joining the cast of Sir Sam Mendes' war epic, which was shot in a single take format, midway through filming.

He said: ''Coming into it, it's quite daunting because you only have a couple of days.

''Because of the way it was shot, unlike the traditional method, you're literally just playing your sequence in one, and once it was done, it was over, so there wasn't a lot of days involved, it was just a very quick in and out so you had to be right up to speed.'' 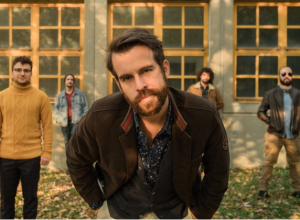