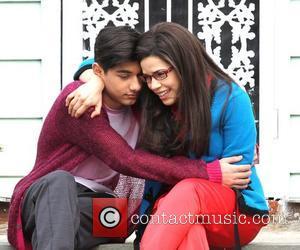 Actor Mark Indelicato had to be comforted by castmates on the New York set of UGLY BETTY after breaking down as he filmed his final scenes on the show.
The star, who was just 11 years old when he landed the role of Justin Suarez on the U.S. comedy, was left devastated earlier this year (Jan10) when ABC TV executives announced they were axing the series.
And taking to the set for the last time on Wednesday (31Mar10) was an emotional experience for Indelicato.
In a post on his Twitter.com blog, he wrote, "Today is my last day ever as Justin Suarez. Only have been on set for an hour and already crying. Standing outside of the Suarez house."
But the 15 year old looks back on his time with the show fondly - and is already looking to the future.
He adds, "Well this is it. I have discovered not only a character in this process of Ugly Betty, but I have discovered myself. With these amazing talented people I have shared so many memories and experiences that I will carry with me for the rest of my life.
"I don't look at this as a sad thing, I look at this as a stepping stone. I am so proud of this show and proud to say that I was and always was a part of it. The friends I made will last me a lifetime and so will this experience. I love my cast and crew but most of all I love the fans of Ugly Betty."