Former Blink-182 star Tom DeLonge has stepped up his war of words with his ex-bandmate Mark Hoppus by alleging they discussed replacing drummer Travis Barker in 2013.

The rockers have been hurling insults at each other this week (beg26Jan15) after Hoppus and Barker announced DeLonge had left the band indefinitely and the guitarist disputed their version of events.

DeLonge has now stepped up their battle by writing a message on Twitter.com insinuating his former bandmates aren't as close as they seem, writing, "A year ago Mark and I spent a week on the phone with managers debating parting with Travis... Don't pretend there isn't more to this story."

Hoppus has confirmed the conversation took place, but insisted DeLonge was simply venting his anger at Barker after the drummer dropped out of their Australian tour in 2013 because he was still reeling from a traumatic 2008 plane crash.

Hoppus tells Altpress.com, "We got back from tour and Tom was having these calls where he was talking about 'can we replace Travis, can we do whatever,' but it was really just Tom blowing off steam. There were a few days of calls where I listened to Tom, commiserated with Tom and, immediately afterwards, called up my manager and (said), 'Tom's upset right now, he's talking about trying to replace Travis, but I'm not into it. That's not going to happen.' And sure enough, Tom, after a month, called back up and was like, 'Hey you know what? I was just angry about it. It was a bad situation, and of course I don't want to kick Travis out of the band.' I don't think Tom was ever truly serious about it. Even at the time, I felt he was just angry and he just needed to vent."

The bandmates have recruited Alkaline Trio frontman Matt Skiba to replace DeLonge for their performance at the Musink Festival in California in March (15). 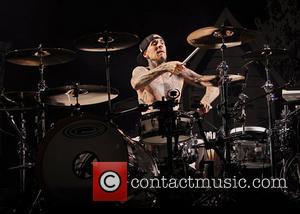