Sidestepping arguments about accuracy, writer Aaron Sorkin and director Danny Boyle take an artistic, impressionistic approach to this biopic about the iconic Apple founder. Using a structure that would work perfectly on stage, the film tells his story through just three extended scenes. In the process, it reveals even more about human nature than it does about Steve Jobs or the tech business. 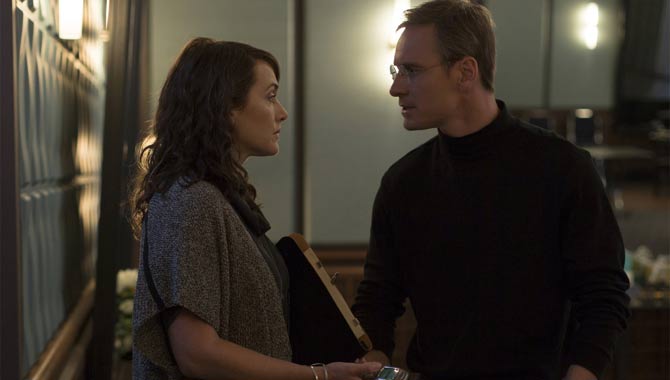 The first segment is set in 1984, as Steve (Michael Fassbender) is about to launch the game-changing Macintosh computer with cofounder Steve Wozniak (Seth Rogen), marketing expert Joanna Hoffman (Kate Winslet) and developer Andy Hertsfeld (Michael Stuhlbarg). As he organises the launch event to within an inch of its life, he's interrupted by his ex-girlfriend Chrisann (Katherine Waterston), but Steve still refuses to accept that her 5-year-old daughter is his. He also has an important conversation with the Apple chairman John Sculley (Jeff Daniels) just before going on-stage. This same scenario is repeated two more times, at the 1988 launch of NeXT and at the 1998 launch of the iMac, tracing Steve's fierce business acumen, complex interaction with his colleagues, and his evolving connection with his daughter.

Fassbender bravely never hedges his bets as Jobs, finding a tricky balance in an innovator who changed the world but never quite made sense of his personal or professional relationships. This is a man who is likeable and cruel at the same time, eliciting both laughter and gasps of horror from the audience. Fassbender's kinetic energy is hugely engaging, matched cleverly by Winslet's Hoffman, the only person with whom Jobs speaks about his own flaws. With both Rogen's generous Wozniak and Stuhlbarg's determined Hertzfeld, Jobs is much more dismissive, although there's respect under the surface. And its the literate banter with Daniels' thoughtful Sculley that gives the film its brainy kick, especially as it's so inventively written and directed to weave conversations right into flashbacks.

Even as this comedy strains to be goofy and transgressive, it catches us by surprise simply because it dares to explore first-time sexual experiences through female eyes. And Aubrey Plaza (Safety Not Guaranteed) brings her usual sardonic wit to the lead role, merrily offending the more timid moviegoers while making more adventurous fans wish the film went even further.

Plaza plays Brandy, who graduated at the top of her Boise high school class. But with that goal achieved, she wonders if she neglected to prepare properly for university social life, so she makes a summer to-do list of sex-related tasks leading, hopefully, to losing her virginity to the hunky guitar-strumming lifeguard Rusty (Porter). She works with him at the local swimming pool along with her nice-guy best pal Cameron (Simmons), who's of course secretly in love with her. But as Brandy works through the list with the help of her friends (Shawkat and Steele) and her experienced big sister (Bilson), she starts to worry that her emotions are getting in the way.

Thankfully, writer-director Carey refuses to let this turn into a romantic slush-fest, keeping the encounters jagged and often very funny. The script is packed with hilariously squirm-inducing conversations about sex, many involving Brandy's far too helpful mother (Britton). Although her dad (Gregg) and her loser boss (Hader) understandably don't want to know. Meanwhile, when the local guys (Glover and Mintz-Plasse) find out about Brandy's list, they are sure to tick off a few items themselves, as does a visiting rock star (Samberg).

By Blake French
Extraordinary
Speed is to hostage thrillers as Psycho is to slasher flicks. Voted one of AFI's Top 100 Most Heart-Pounding Movies of all time, few hostage movies reach this level of tension and sustain it throughout the entire running time. Audiences may have experienced similar stories before, but they are seldom done this well and with this level of energy.