'Dancing With The Stars' Mark Ballas Marries BC Jean

By Stephanie Chase in Lifestyle / Showbiz on 26 November 2016

Mark Ballas Dancing With The Stars

The couple have a lot be thankful for this Thanksgiving weekend.

'Dancing With The Stars’ pro Mark Ballas married his fiancée BC Jean, in a romantic ceremony in Los Angeles on Friday.

The couple have been together for three years and are also both members of Ballas' band Alexander Jean. 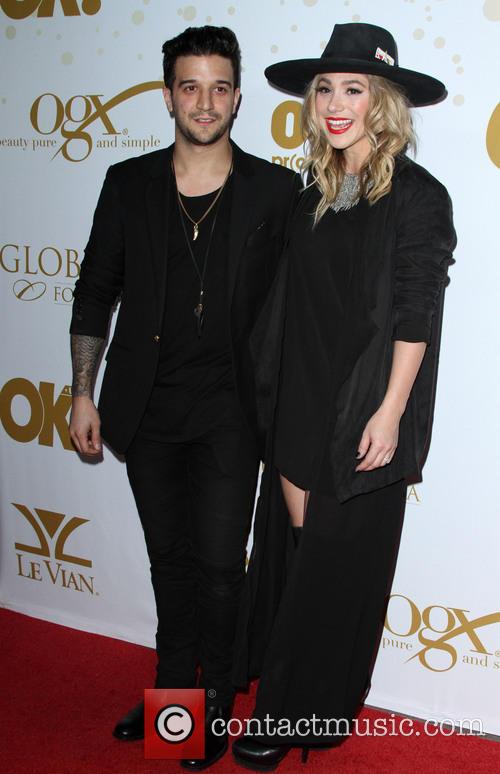 Mark Ballas and BC Jean are married!

Anderson Cooper is not convinced by Bristol Palin’s ‘meltdown’ on Dancing With the Stars. Bristol was shown having an argument with her dance partner Mark Ballas, accusing him of not wanting her as his dance partner for the show and for not showing up for rehearsals. Of course, the episode was filmed and shown to the public. Anderson and his co-host Deborah Norville simply weren’t convinced that the ‘meltdown’ (as it has been portrayed in the media) was anything more than a desperate appeal for sympathy from Palin.

“Anybody who's on a reality show now knows that to get attention you have to take it to another level,” said Cooper. “You need to have a wardrobe malfunction, you need to pass out, you need to throw up, you need to have a fight, you need to have a break down. You need a storyline.” It certainly looks as though that’s the angle that 21 year-old Palin is going for and frankly, who can blame her, because it seems to have worked. All of the DWTS headlines since Sunday’s show have been more concerned with Bristol and Mark’s relationship than any of the actual dancing that took place over the weekend.

Anderson and Deborah went on to mock Bristol’s frozen expression and apparent lack of genuine emotion during the awkward clip that they played of the pair having a disagreement. Cooper then slammed Palin, suggesting she should simply stop doing TV work: I'm thinking of starting a job fair for people… I think there's a whole bunch of people who just need to get jobs: Lindsay Lohan, Bristol Palin… I think they just need to get some jobs, stop being on TV.” Oops – looks like that sympathy appeal may be floundering, Bristol.

Have Bristol Palin and Mark Ballas really put their bust-up behind them? Or are the smiles all for show? Mark Ballas has been pretty chivalrous, as he spoke to the press about falling out with Bristol, behind the scenes at Dancing With The Stars. Palin has hardly been doing well on the show – she’s not exactly a popular character and she’s scored pretty low each week that the show has been on. “We love each other," Ballas explained to People Magazine. "Sometimes people piss each other off. We've swept it under the rug and carried on. We had a rough day out of many, many, many days that we've spent together." Pretty generous behavior, given that she accused him of being mentally and physically absent from some of their rehearsals together.

Palin also accused Mark Ballas of wishing that he had been dancing with his former partners, such as Sabrina Bryan or Shawn Johnson, though he insists that isn’t the case, stressing that whilst he will “continue to support them… Bristol is my number one and I'll always be here 100 percent.” The media, of course, will be looking for the smallest sign of ongoing drama, though Mark insists that the row is behind them. “We're fine," Ballas said backstage after the show. "We've danced together before. This isn't our first season together. The last season we did together, we didn't argue once – nothing, we were just chill. So the fact that we've made it through a season and a quarter and this is now our first fight is amazing.”

Is this just a front from Ballas and Palin though? Bristol herself hasn’t been quite as vocal on the matter – though she’s hardly renowned for being tactful when she’s faced with pressure, so maybe the show’s producers are trying to make sure that Mark does all the talking. It will be interesting to see how the pair get on for the remainder of the series… for however long they remain.

Mark Ballas On Bristol Palin’s Dancing With The Stars Meltdown

It was a bad week for Bristol Palin on Dancing With the Stars. The 21-year old posted the lowest scores of the night and had a bit of a tantrum. Mark Ballas, who was on the receiving end of Palin’s childish outburst, explained the situation to the press after the show, reports Entertainment Weekly.

“Here’s the thing with these packages they show before our dance … they’re a minute and a half,” Ballas explained. “We did just that. We’re fine. We’ve danced together before. This isn’t our first season together. The last season we did together, back in season 11, we didn’t argue once. Not even… nothing. Just chill. So the fact that we’ve made it through a season and a quarter and now it’s our first fight? It’s amazing because at some point you fight with your partner.” Palin had accused Ballas of “being bummed” that he isn’t dancing with former partners Shawn Johnson and Sabrina Bryan, and that he’s emotionally, and sometimes physically, absent during their rehearsal time, so it was mighty big of Mark to stand up for her like that.

“We’re like family,” Ballas continued. ”We love each other. Sometimes people p*** each other off. You guys know if you’re in a personal relationship, working relationship, things happen and we carried on.” Palin, slightly tenderly, admitted: “Mark is reassuring and we got through this week and I’m thankful for it. I’m thankful that we got that fight out of the way and we’re just moving along.”

First ‘9’ On Dancing With The Stars, Courtesy Of Sabrina Bryan

Dancing With The Stars Season 15 had its first ‘9’ score last night (October 1, 2012), courtesy of girl band singer Sabrina Bryan. Her routine, with Louis Van Amstel, had the judges in rapture, especially Carrie Ann Inaba who said she’d never seen such lines of Dancing With the Stars before, according to People magazine. Bruno Tonioli awarded Sabrina 8.5 and compared her to Ginger Rogers, at the height of her career: “a true dazzler.” Len Goodman was equally full of praise for The Cheetah Girls star, remarking on her upper body control and legwork: “the hits just keep on coming,” he said.

At the other end of the scale was Bristol Palin who went home with the lowest score of the evening – a paltry 18, which was less than last week’s score of 19.5. “You were not in hold enough,” Bruno told her, as her Western-inspired routine failed to impress. Palin explained that she had taken her dancing partner Mark Ballas to a shooting range to give him an insight into her world but that sadly hadn’t translated into chemistry on the dance floor.

It was the second episode of the show and tonight, someone will be going home, in the Dancing With The Stars results show. One dancer unlikely to exit tonight is Kirstie Alley, who proved to the judges that her age should not be an obstacle to her progressing n the competition. “Age is just a number and you just proved that to us,” said Carrie Ann, whilst Bruno told her “Experience counts, and you showed it. You blended beautifully.”

Dancing With the Stars dancers Maksim Chmerkovskiy and Mark Ballas are seen arriving at the Roxy in Los Angeles to attend a Massey Boyz concert. The two friends check out a girl across the road while queuing up and Mark jokes that they (meaning Mark and Maksim) have no problems when going to the bathroom on the set of Dancing With the Stars.

Mark Ballas and his celebrity partner Kristin Cavallari were eliminated in the third week, while Maksim and his partner Hope Solo continue to dance every week.

American dancer Mark Ballas is seen leaving 'Dancing With The Stars' practice in Los Angeles, with his celebrity partner, Kristin Cavallari. He sees her to her car and signs an autograph for a photographer. Although he tells the photographers that he's fine, he refuses to answer questions about his split from American Idol singer, Pia Toscano.