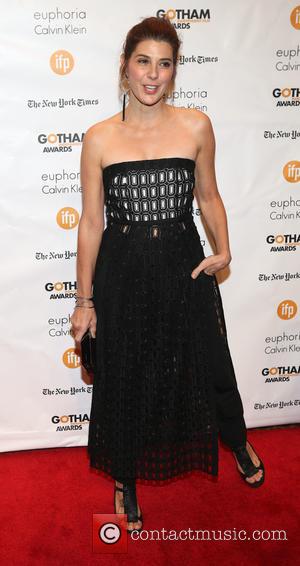 Picture: Marisa Tomei - Photographs of a variety of stars as they arrived at the 24th Annual Gotham Independent Film Awards which were held at Cipriani...

Actress Marisa Tomei's parents have filed a $10 million (£6.25 million) lawsuit against their New York neighbour Sean Lennon in a dispute over a tree.

The My Cousin Vinny star's parents, Addie and Gary, claim John Lennon and Yoko Ono's son has failed to take care of a towering tree in his Greenwich Village front yard, which is gradually encroaching on their property.

The Tomeis allege the rotting 50-year-old ailanthus' roots have caused damage to their stoop, broken their iron railings and now they are starting to compromise the basement wall.

The couple's lawyer previously fired off a letter to Lennon in September (14), accusing him of ignoring the advice of his arborist and other professionals, who have deemed the tree a hazard.

They are demanding the tree be cut down and are seeking $10 million in damages.

Lennon, who moved next door to the Tomeis in 2008, has yet to respond to the suit. His house is currently under construction, reports the New York Post.