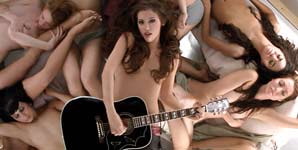 With the success of a top 10 album and #1 single in Japan, Marion Raven is primed to make waves in the U.S. Eleven Seven Music will release Marion's 6-song ep titled Heads Will Roll exclusively through iTunes on October 24th with her full-length U.S. debut coming out first quarter 2007.

The songs on Marion's EP reflect a broken relationship and the feelings that follow. At times the music is dark, vengeful and powerful, but ultimately uplifting and cathartic. Marion collaborated with some of rock's biggest names including Nikki Sixx (MÃƒÂ¶tley CrÃƒÂ¼e), Keith Nelson (Buckcherry), Raine Maida (Our Lady Peace) and Scott Stevens (The Exies).

In addition to writing and singing, Marion also plays the piano, electric and acoustic guitar on many of her songs.