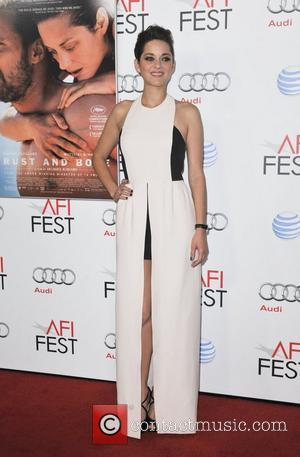 French film Rust and Bone opens in the USA tomorrow (23rd Nov. 2012). Let's find out whether it's worth spending a couple of hours on this weekend.

'Rust' and 'bone' both have the implications of decay: rust is the result of neglected metal, while bare bones- without flesh- are definitely dead. With such despondency in the title it's a wonder that a film with this name could be so heart warming, but that's precisely what it is. And the essences of decay in the title point toward the broken protagonists, Ali (Matthias Schoenaerts) and Stephanie (Marion Cotillard). Stephanie works at Seaworld and loses her legs just above the knee. Helping her cope with the traumatic loss of her limbs is Ali, an ex-boxer with a five year old son who is fleeing a vaguely known but very bad situation elsewhere.

They're both damaged people that come together to cure one another. Although romance, struggle and disability are all aspects of cinema that appear quite often, the combination in this sweet film seems to do it in a different way, because it's all of these things and more. It has a subtle backdrop of marginal poverty, and tense class relations give the entire production energy in its inherent tautness.

The New York  Times describes the movie as "something of a fairy tale... but one that casts its spell with a rough, raw and sometimes thrillingly ugly magic". The Wrap was captivated by Cotillard, describing her as "luminescent" and saying that she "[demonstrates] yet again that she is an actress of enormous range and depth." And the Daily Telegraph continued her praises, writing, "Cotillard, who's been waiting since La Vie En Rose for a role this substantial, is at her damaged, devastating best." Our verdict is yes, Rust and Bone is more than worthy of two hours of your time and a few of your hard-earned bucks.